Windmills, tulips, clogs, cheese and Van Gogh….. these are the words that spring to mind when Holland is mentioned. When you visit the Netherlands you expect to see windmills, lots of them. Even better would be to see inside one, but how to do go about visiting a Dutch windmill?

As we drove around the Netherlands we saw plenty of windmills, helped by the fact that they are marked on the road map and I plotted a route that took us past as many as possible.  Imagine my delight when driving across the polder six miles east of Alkmaar I saw a sign that proclaimed Museum Mill, OPEN!  Our trusty guide book had not mentioned such a thing, nor had I seen any leaflets about it (and I love a leaflet), a surprise of the very best kind. 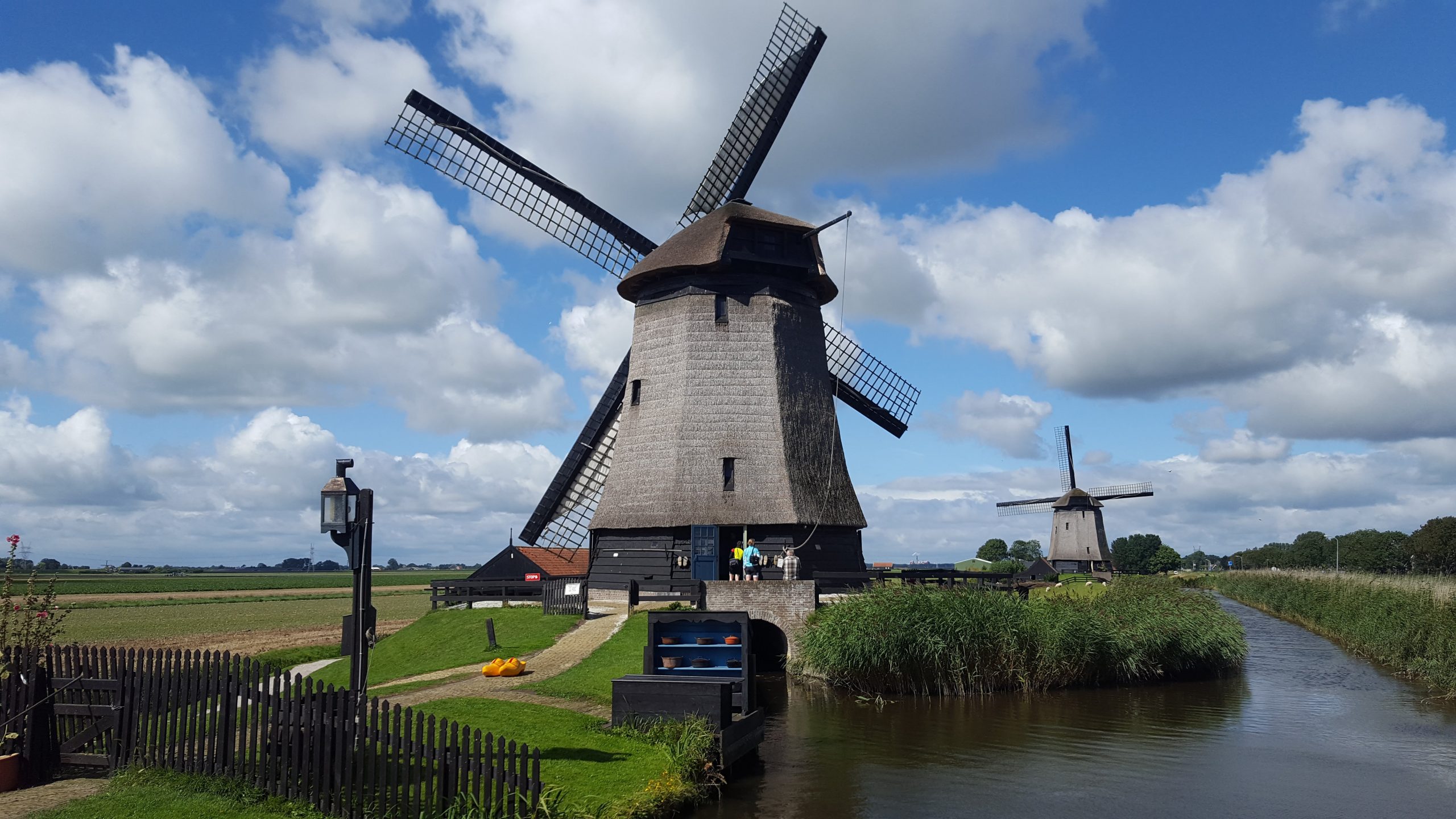 What we had stumbled upon was the Schermer Mills or Molen they are open every day from early Spring until late autumn.  Everything you ever wanted to know about the engineering project of draining and maintaining the Polders and the lifestyle of the miller is explained.  You get to wander round the millers living quarters and clamber up and around the moving mechanism.  There is even a film in English explaining the history of the mill and the land you see around you. 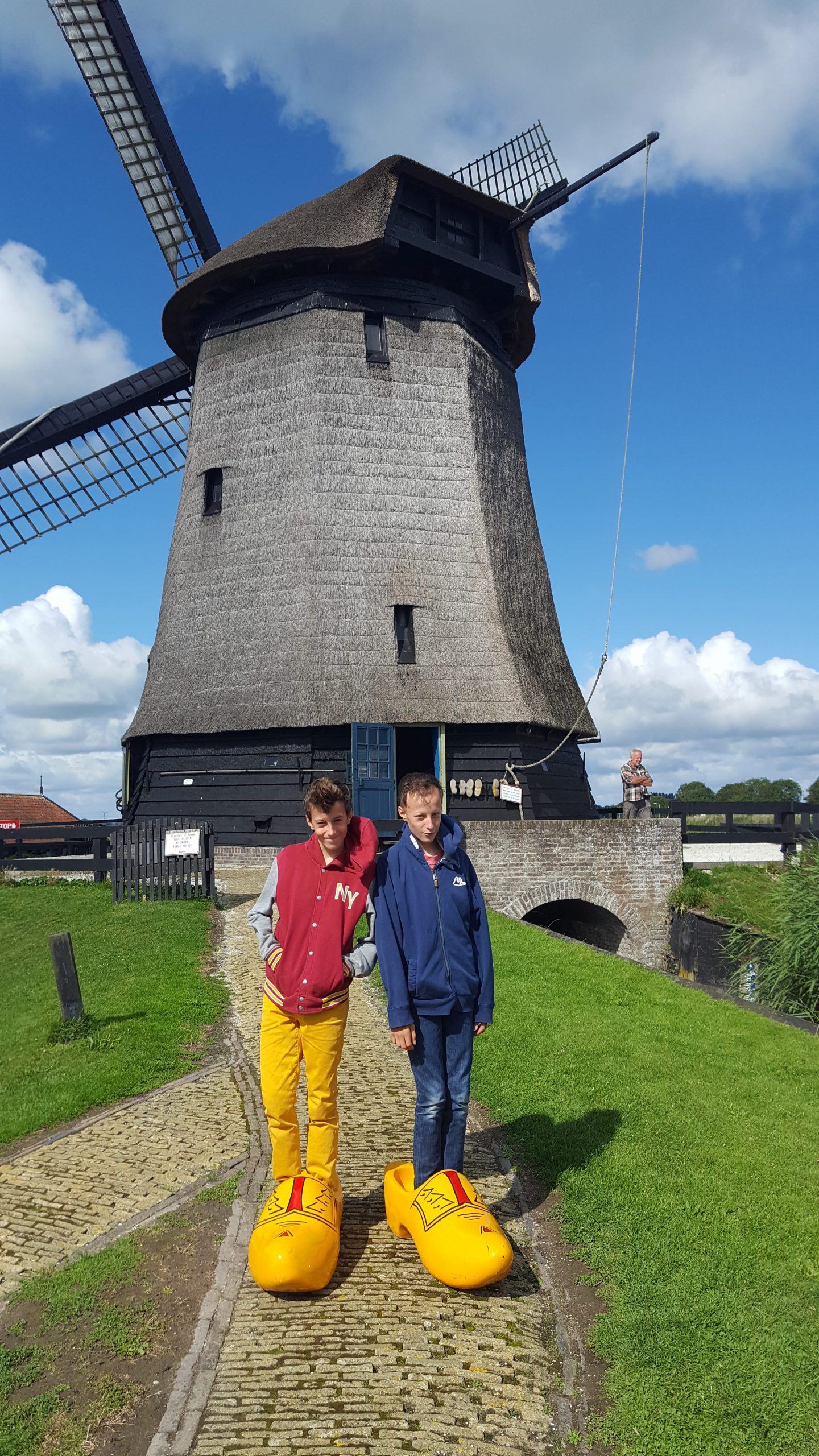 In one word, hard!  On the upside the commute was non existent as you got to live in the office.  On the downside you might need to work at any time of the day or night, who knows when the wind will change direction or the rain begin to fall.  Pay was low but you also got free accommodation and an allowance of petrol, candles and peat, on top of that you also had use of a small plot of land on which to grow vegetables and maybe graze a cow or two.  Not only did you not get paid very much, the work was hazardous with lots of heavy moving machinery to fall into.  Well at least the accommodation would be cosy?  Well, I’m afraid not, the mills were not very well insulated and had no proper chimney meaning that the rooms would have been both draughty and smoky.  Which is a shame because they look so cosy and picturesque now! 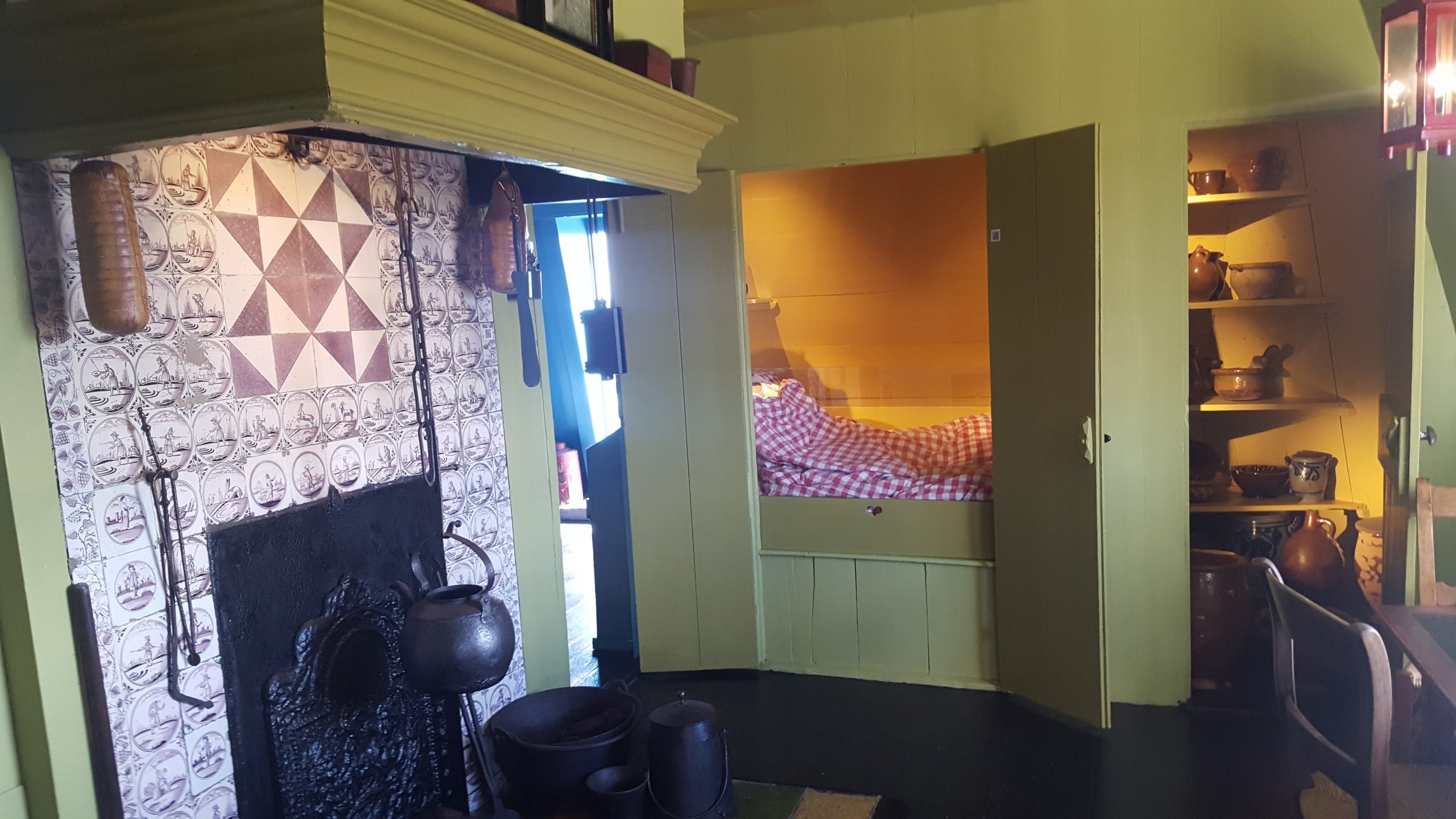 Why does the Netherlands have so many windmills?

Good question!  The Netherlands occupies the land where the Rhine flows out to the sea. Meaning that the land is low lying and vulnerable to flooding both from the river upstream and from the sea.  So vast is the Rhine that it doesn’t just reach the North Sea at one place rather it has many distributaries.  One of these is the River Ij, which used to reach the sea at Amsterdam via the Ijssel Meer which meant that the thin stretch of land from Haarlem, to Alkmaar and up to Den Helder was at risk from being washed away.  So the Dutch were faced with a choice, settle for regular flooding and soggy ground or drain the land and put in place an elaborate set of flood defences.  They chose the drainage option and windmills were needed to pump the water up and away.

Drainage began at the end of the sixteenth century and really gathered pace after that.  In 1608 the Beemster polder was drained, so successful was this that the investors eyes turned to the Schmerer Lake.  In 1631 the decision was taken to drain the lake.  Work didn’t start for another three years as the large and deep lake proved to be a daunting task. 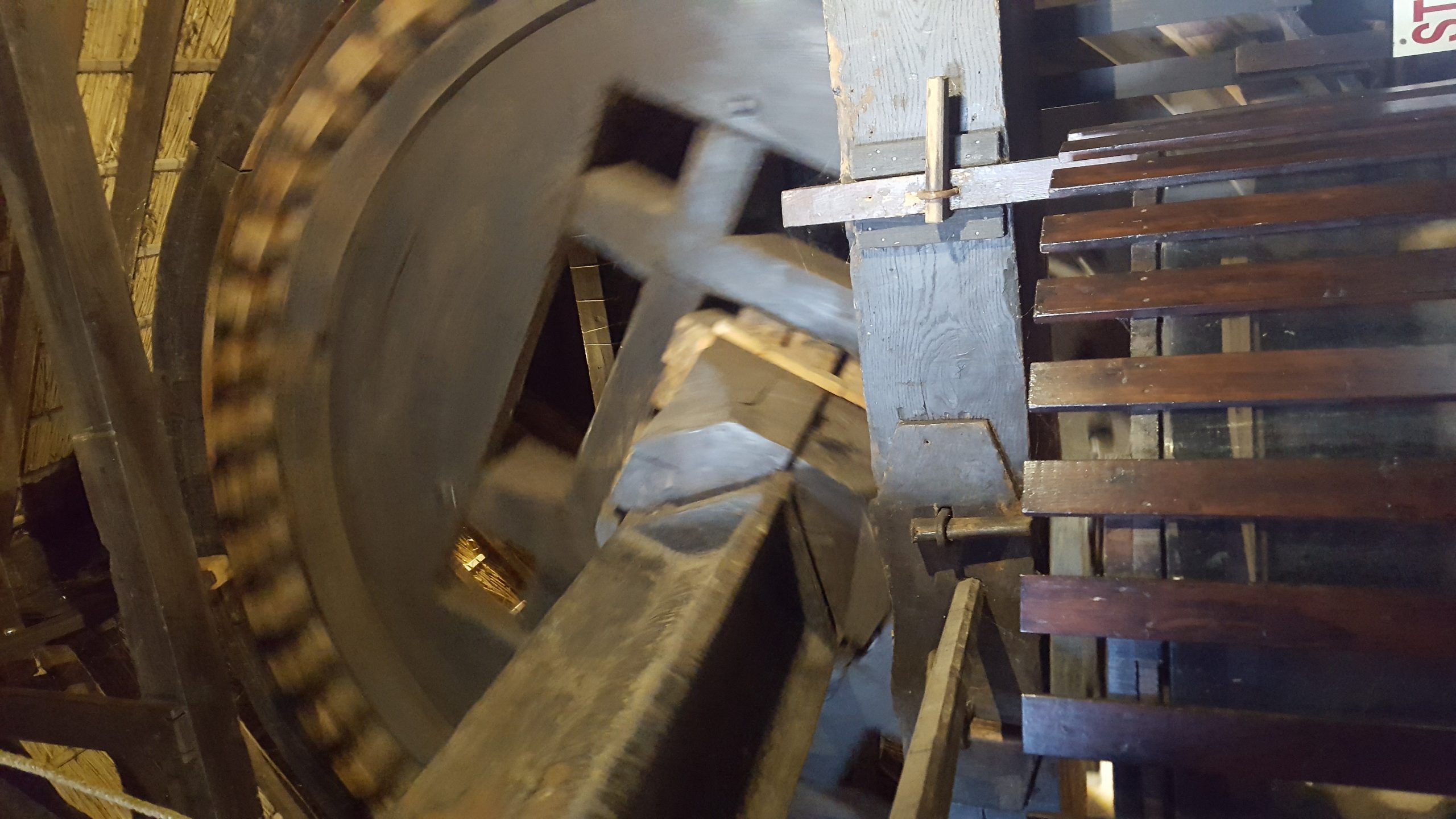 How do you create a Polder?

And, indeed, what is a Polder?  First things first, a polder is the land created by draining water.  How do you make a Polder?  You start by digging a big circular canal, the dikes (or banks) were made using the earth that was dug out, thus creating a ring dike.  (Are you keeping up at the back?). Windmills were put on top of the dikes, these were called ring mills or top mills.  Once these mills had drained as much water out as they could another lower layer of mills was built …. these were called middle mills. These middle mills pumped water up into a new waterway and then the top mills pumped that water up into the ring dike and away. Four layers of mills were needed to drain the Schmerer lake.  Even when the land was fully drained all four layers of mills were needed to ensure that the water didn’t come back again.  Fifty two windmills were built in Schmerer, some of them solitary ones and others grouped together.


How does a windmill work?

More specifically, how does a polder mill work.  Those windmills look pretty solid, don’t they?  Well, they’re not because the land is so fragile that a heavy structure would just sink.  They have eight solid staves of wood that hold up the cap and the sails and the rest of the structure is flimsy and reed covered.  That cap at the top, it can move around meaning that the sails can always be pointed in the best direction to catch the wind.  Water was raised from one level to another by means of a six meter long water wheel, not the kind of water wheel that we are familiar with in the UK but rather an Archimedes screw type of wheel. 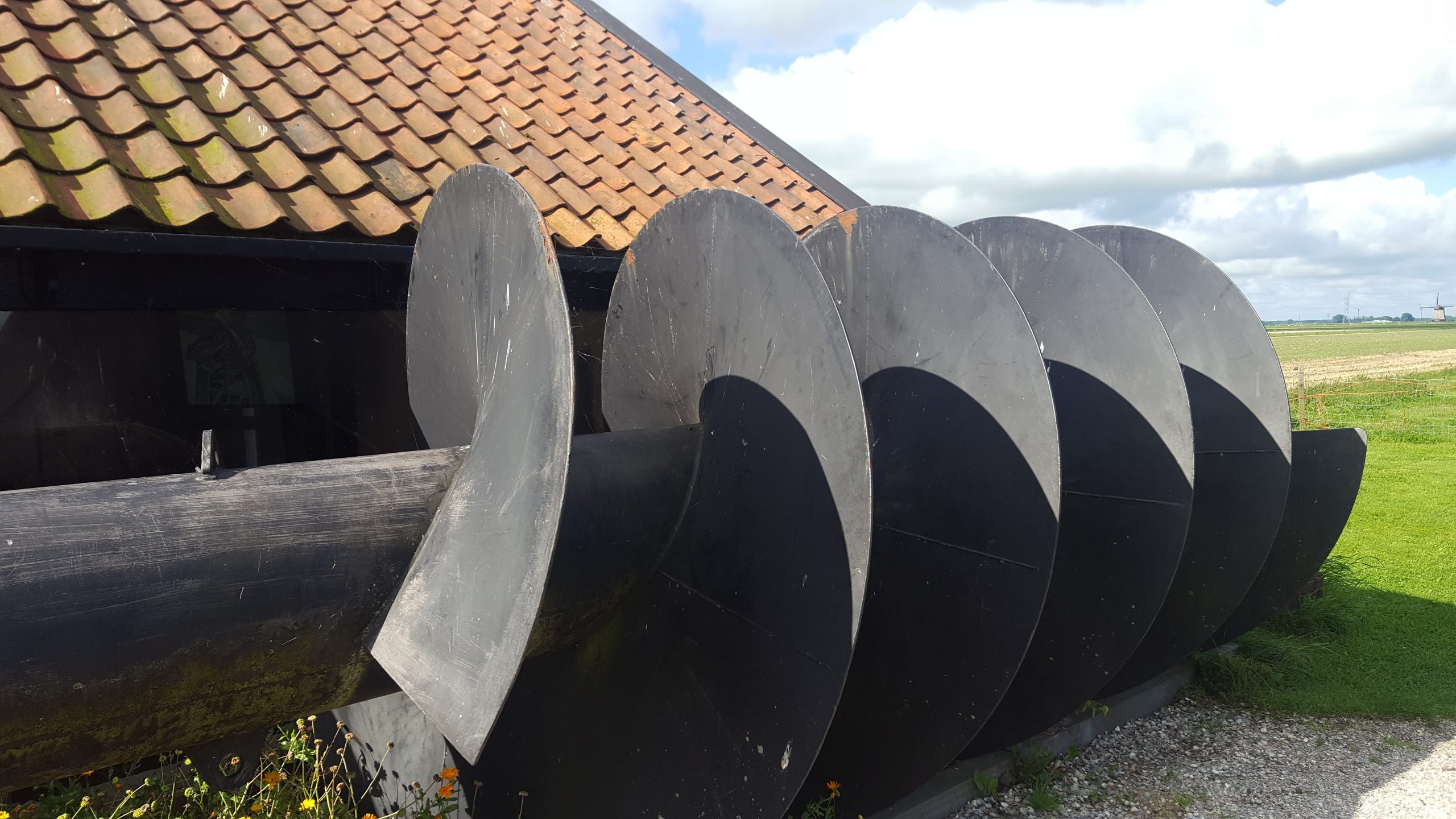 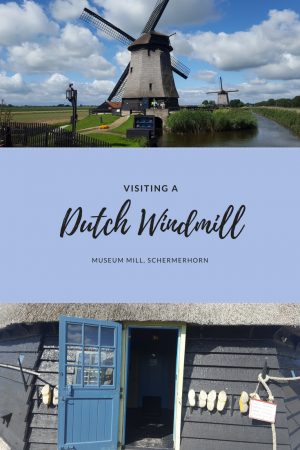 Staying in a Dutch Castle

Amsterdam Swing Over the Edge