Rome glinted and glimmered in the distance as we headed to the airport at the end of our honeymoon, “A wonderful city, I will take you there soon.” promised Mr CW.  Seventeen years and two children later and we finally made it.  Mr CW assumed the air of a seasoned tour guide and drew up his own itinerary of Rome for First Time Visitors.

The Colosseum, the Forum, the Trevi Fountain, the Pantheon, the Spanish Steps, St Peters and the Vatican; was the list we came up with.  Add to that I wanted to walk down via Condotti because there used to be a very nice pizza place off Regent Street called Condotti (sadly no longer there).  Thankfully Mr CW agreed with us by and large, plus some strong views on eating and snacking, so here is Mr CW’s guide to Rome for First Time Visitors. 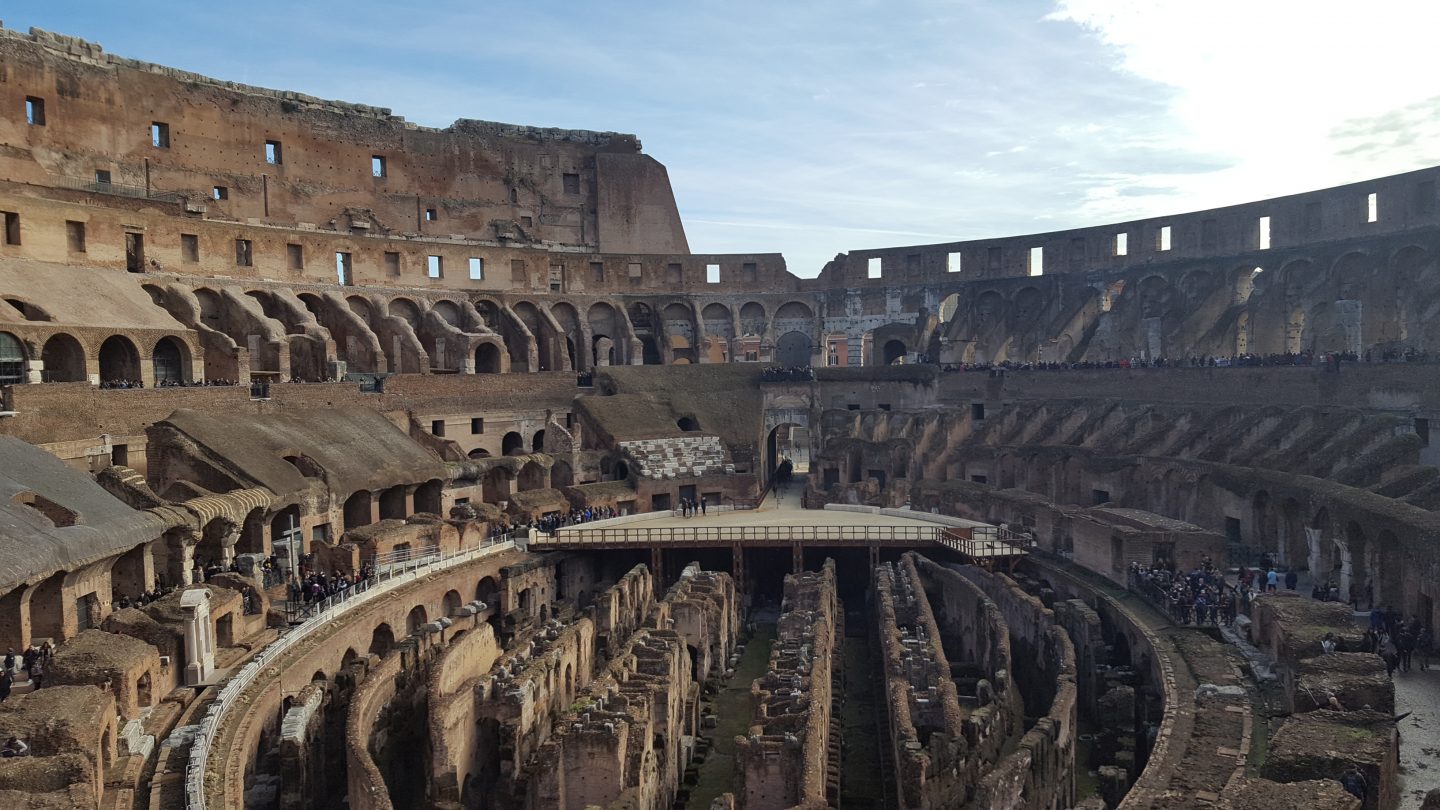 The Colosseum was the sports arena for Ancient Rome, so brilliant is its design for getting lots of people in and out quickly and then offering a tip top view that it has been copied by pretty well every stadium since.  Next time you visit Wembley take a look around you and thank the Romans for their top class planning skills.  So iconic is the Colesseum that it was on every Olympic winners medal until the Sydney games in 2000.  You will have seen pictures of the Colosseum.  You may even have visited other Colesseum’s around the world, like the amphitheater in London but nothing will prepare you for the moment that you walk into arena and see the banks of seating and the stage below.  Whatever else you do when visiting Rome for the first time the Colesseum is one thing that you must, must do.  Turns out that it is the top of lots of other peoples lists too, expect queues, really really long queues.  To avoid the worse of those queues arrive early in the day, we were there at 8.45am just fifteen minutes after  opening and there already hordes of people. 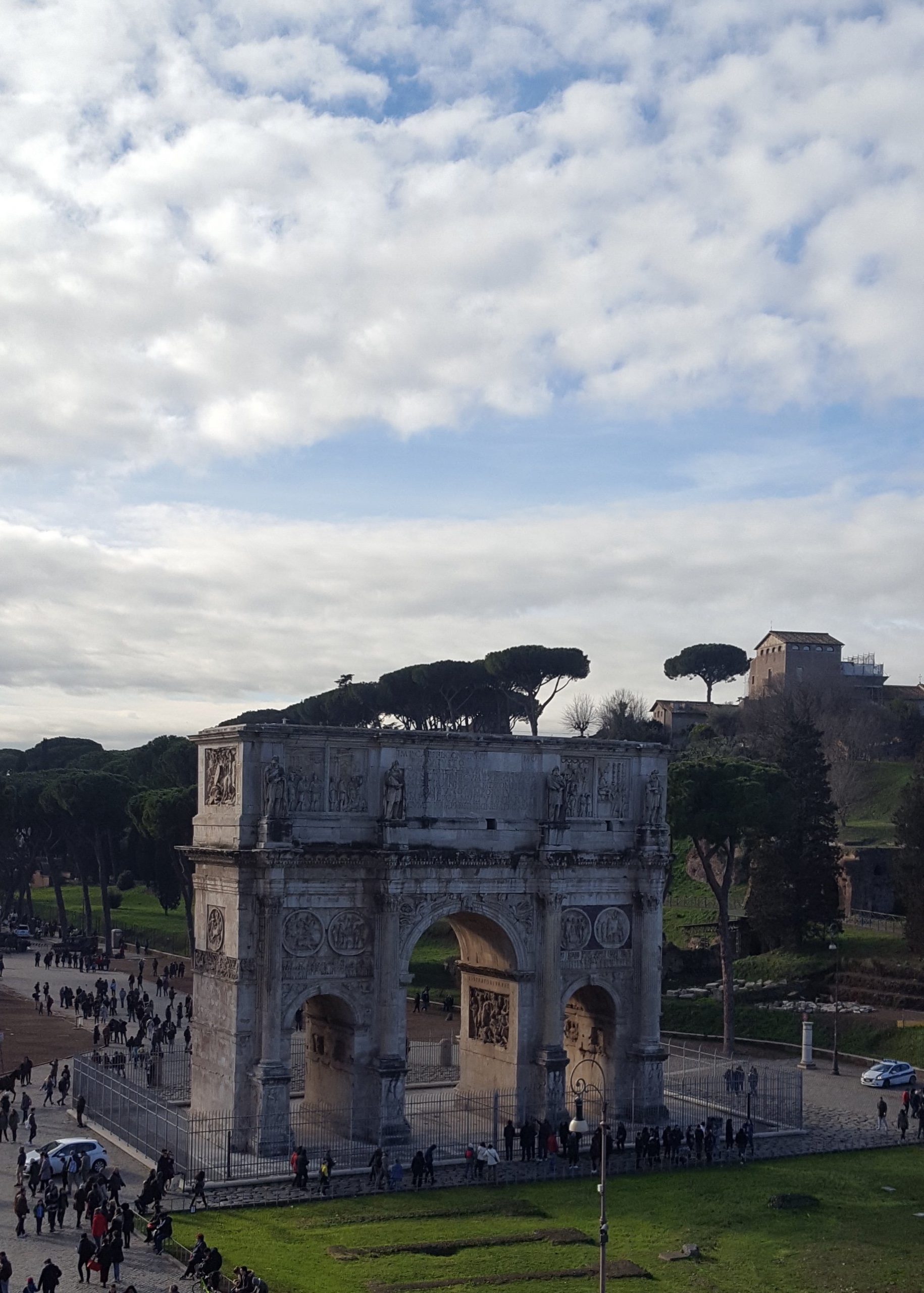 As you leave the Colosseum and head to the Forum you will pass the Arch of Constantine.  Anywhere other than Rome this huge arch dating from the fourth century would be a major talked about landmark.  Here is it just another magnificent monument.  Take time to look up and admire the inscription that dedicates the arch to Constantine for his wisdom.  Constantine was the emperor who made Christianity the official religion of the the Roman Empire. 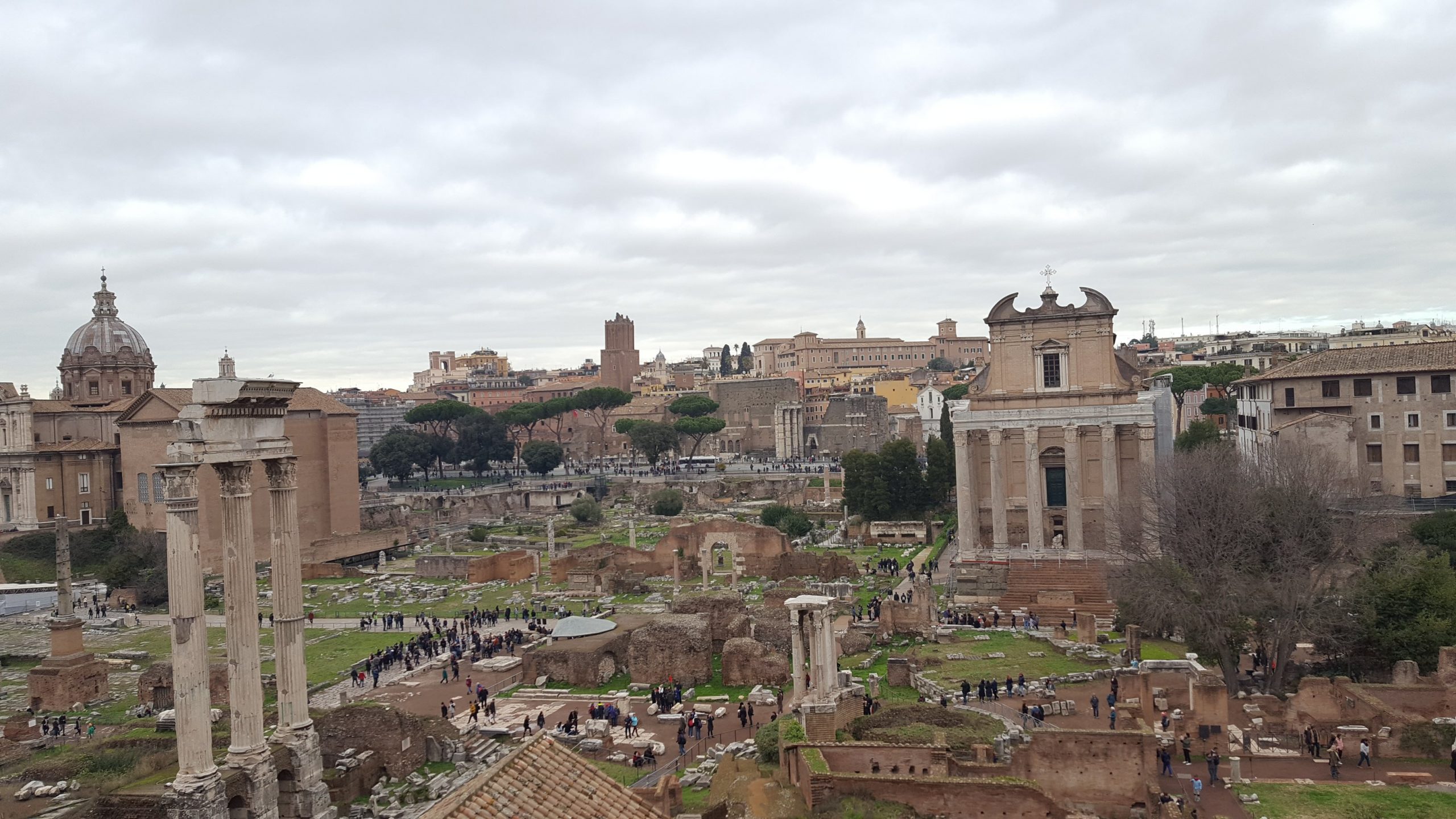 Before visiting Rome I confess that I thought that the Forum was a building and was maybe a bit small.  How wrong I was.  Nothing had prepared me for the sheer scale of the Forum, it is bigger than many English villages.  The ruins are quite simply amazing.  Look here and you will see the Temple of Vesta where the Vestal Virgins lived, over there the Temple to Julius Caesar built just two years after his death, turn round and behind you rises the Palatine Hill site of the palace of the Emperor Augustus.  Excavations of this enormous site did not begin until the nineteenth century and are still going on today.  The Forum is all ruins, you need quite a bit of imagination to envisage the place thronged with life but it is amazing.  Your ticket, which also covers the Colosseum, is valid for two days and you could easily spend two days here and not see everything, but I would suggest on your first visit you amble through from one end to the other rather than investigating every last stone. 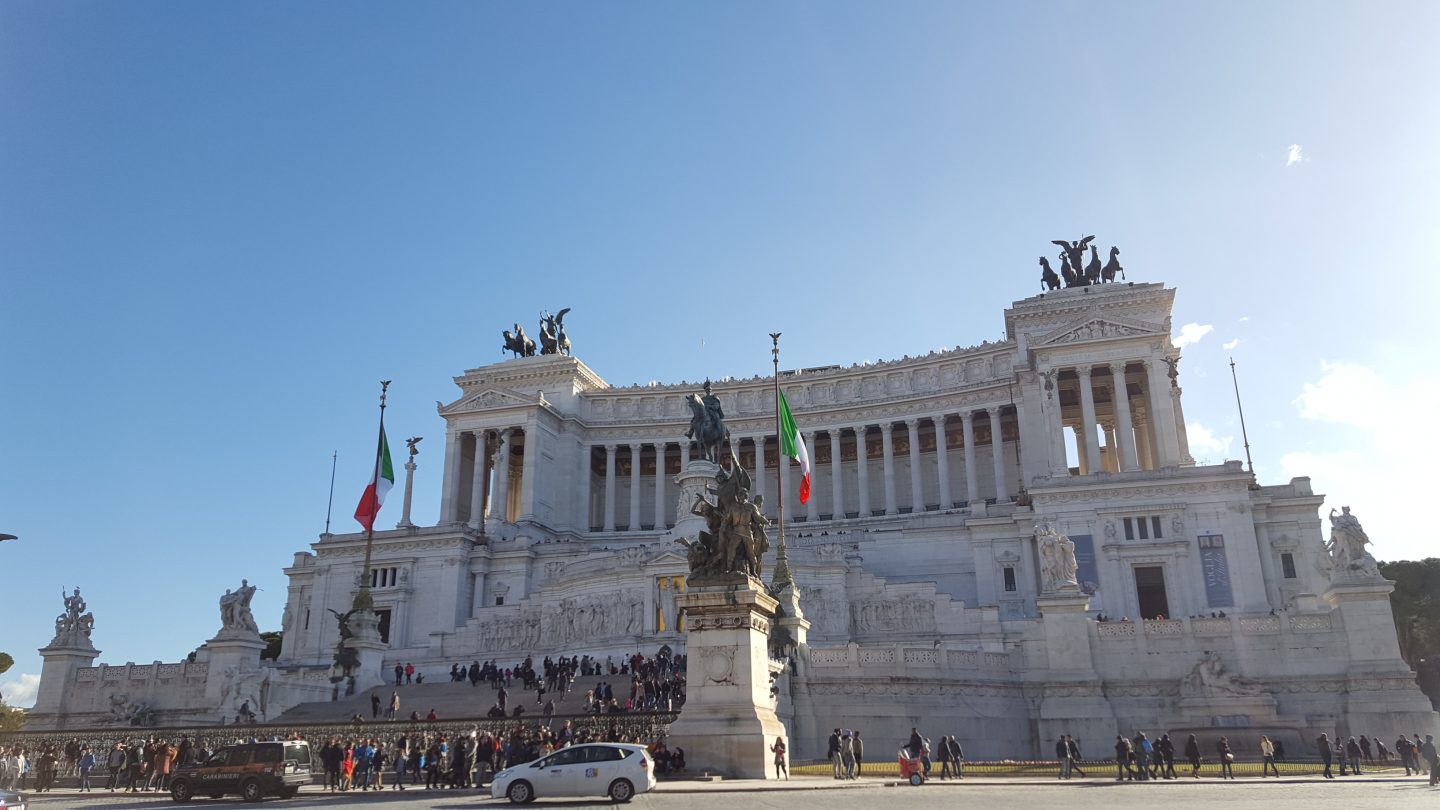 As you leave the Forum and head toward the Centro Storico you will encounter the Palazzo lined Piazza Venezia.  Turn around a look behind you at the HUGE white marble edifice rising up between you and the Forum.  This is the Vittoriano built at the end of the nineteenth century to celebrate the unification of Italy and the new King Vittorio Emanuele II.  Some call it the wedding cake due to is vast tiered whiteness.  Right in the centre sits Vittorio Emanuele astride a horse in what is one of the world’s largest statues.  You can go inside the monument but we thought that this was a treat best saved for another time. 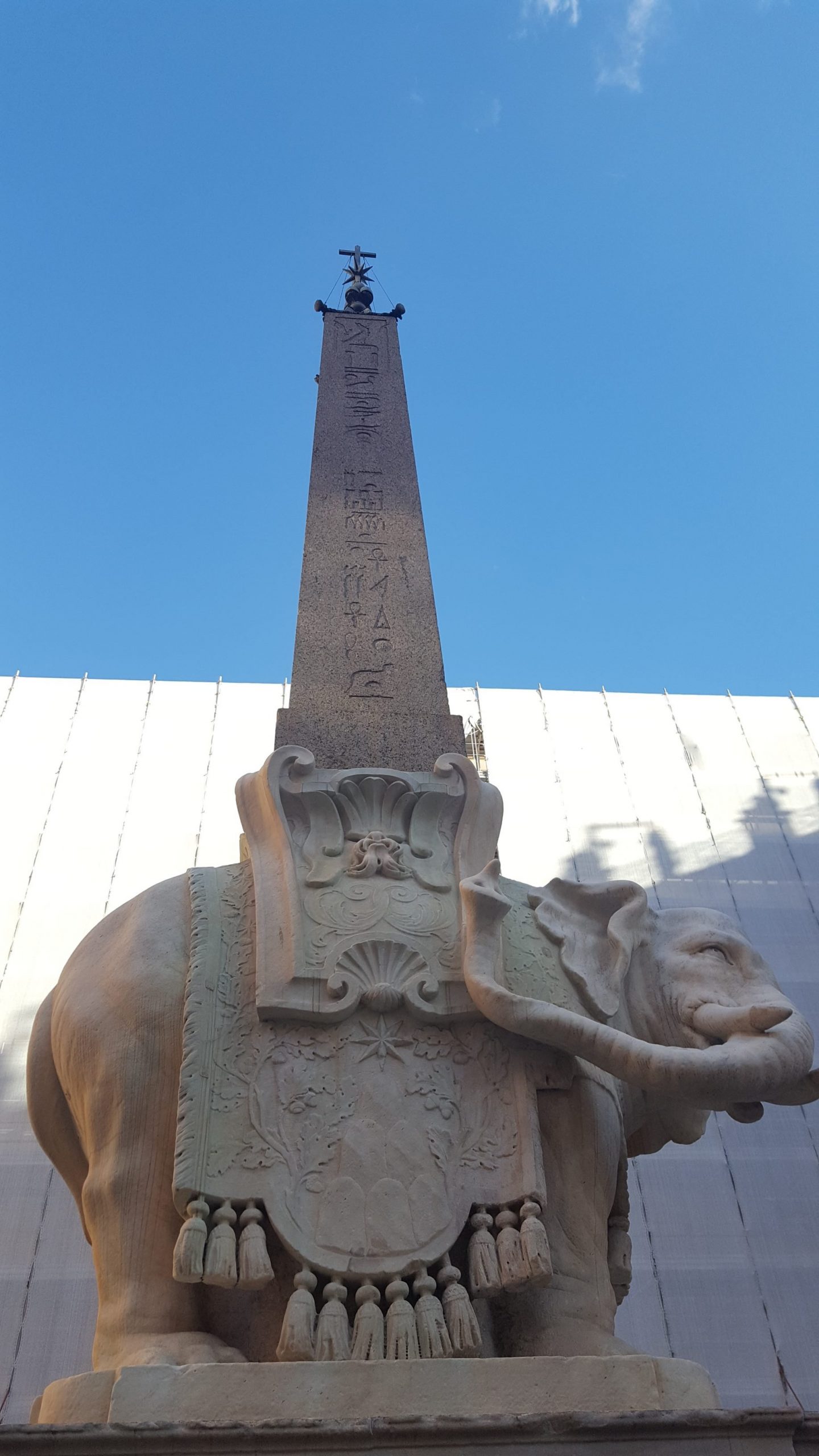 As you zigzag through the narrow streets of the Centro Storico just behind the Pantheon in the Piazza della Minerva you can see the most wonderful elephant statue.  Bernini sculpted the tiny elephant with an enormous obelisk rearing out of his back, apparently it celebrates the reign of Pope Alexander VII as it shows that strength can support wisdom.  It made me smile. 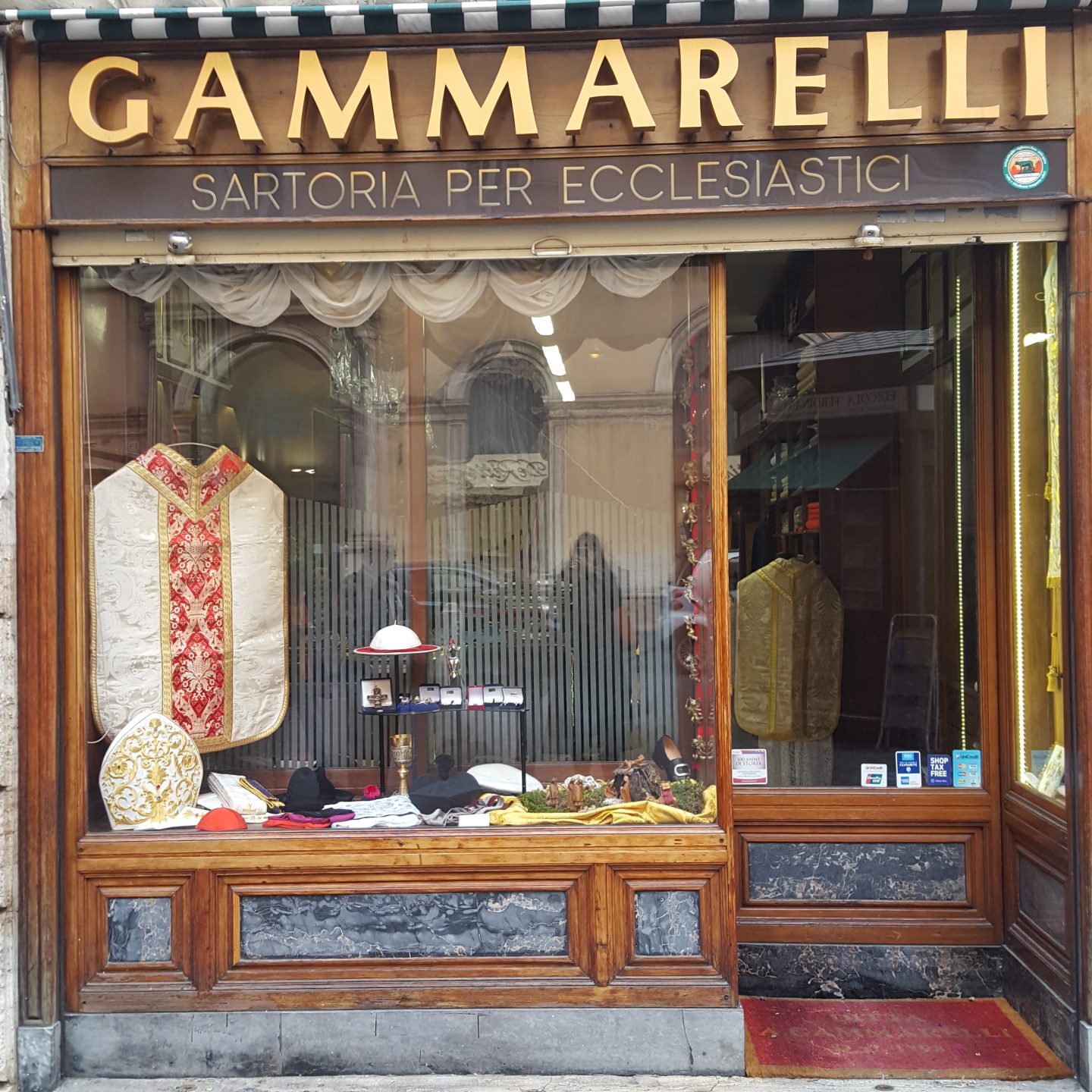 Making clerical garments is big business in Rome and the tiny streets behind the Pantheon are the centre of the trade.  If you have ever fancied owning a set of clerical robes this is the place to look.  Right next door to the elephant on Via di Santa Chiara is Gammerelli.  Every time a new Pope is elected Gammerelli send over three sets of snowy white papal garments to ensure that there will be one in the new Pontiff’s size. 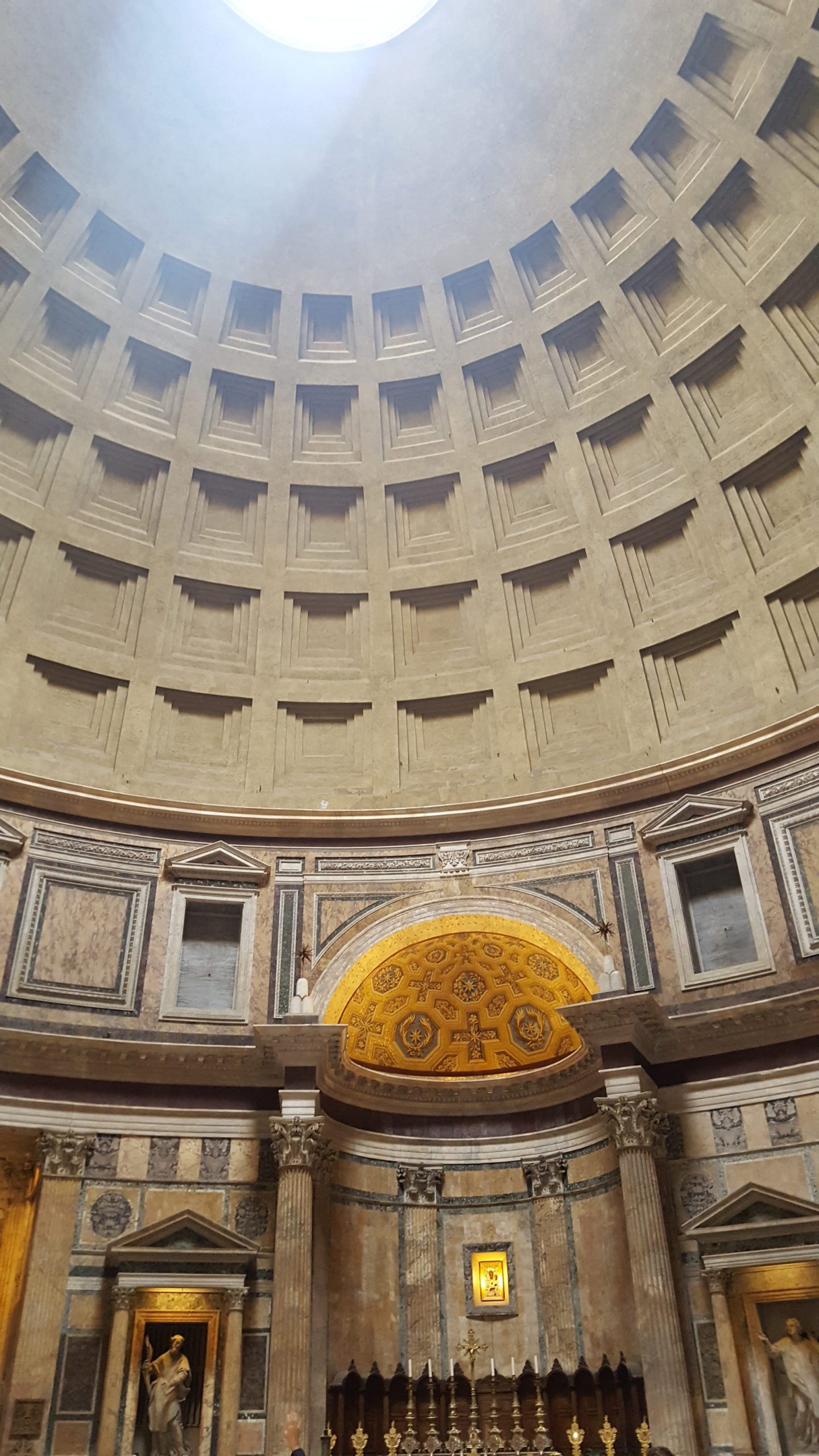 The Pantheon is the most complete ancient Roman building in Rome today.  A temple was first built on the spot in 25BC but was rebuilt by the Emperor Hadrian (the same one that built the wall) in AD125 about five hundred years later it became a Christian church which it still is.   The dome that soars above you is the world’s largest unreinforced concrete dome in the world.  Lets just stop for a moment.  This dome is getting on for two thousand years old and it is still the largest of its type in the world, how amazing is that.  Not only that, it is beautiful.  Light spills into the interior from the oculus in the roof, creating shafts of light reaching down highlighting the dust motes as they go. 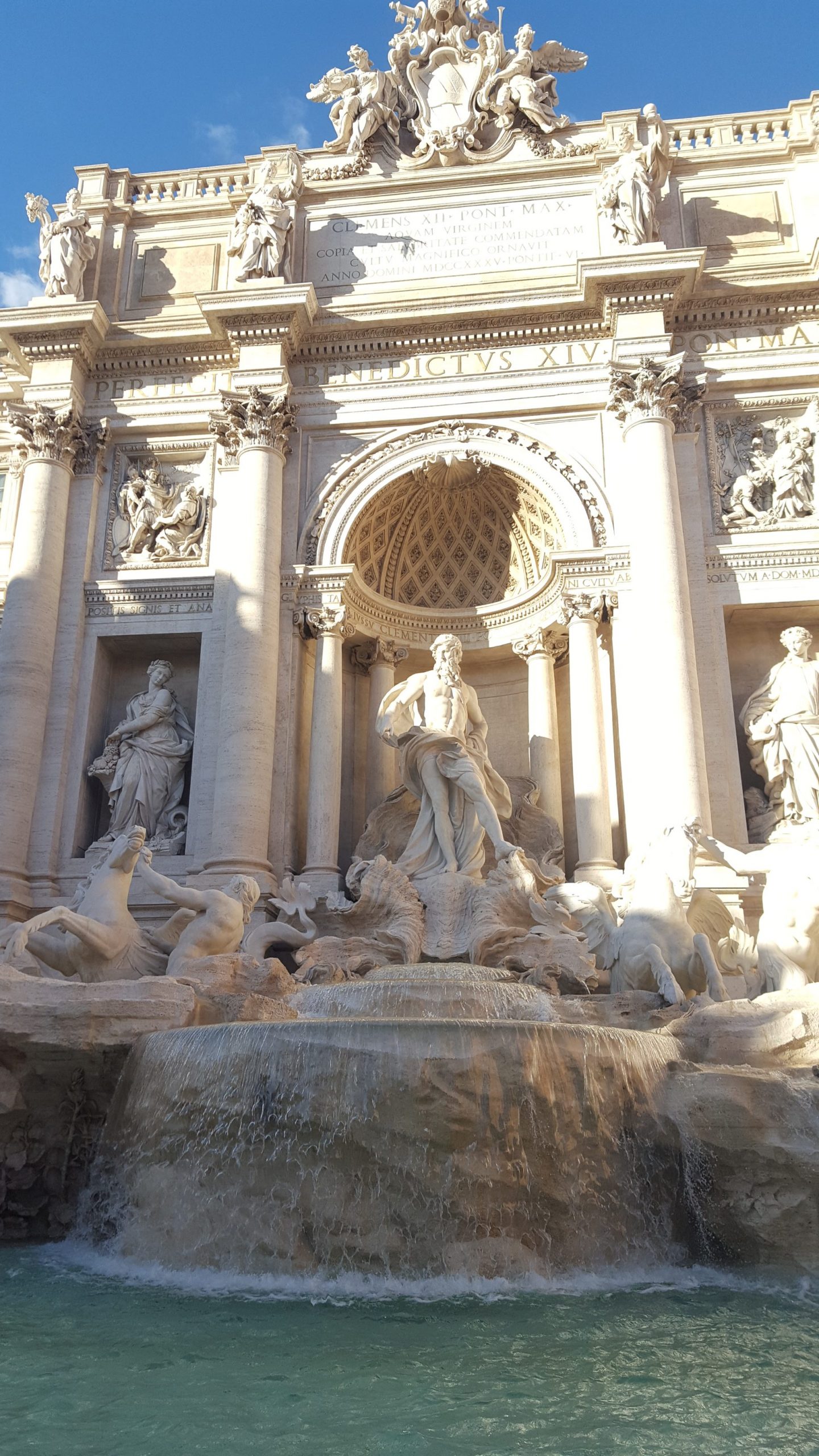 You will hear the Trevi Fountain way before you see it, rather you will hear the chattering crowd that surrounds it.  Everybody is trying to get close enough to throw a coin into the fountain to ensure their return to the eternal City, whilst taking a selfie of moment.  Don’t for a second think about not joining them.  The water gushing out fancy Baroque statues is stunning.  All that water come from the underground water source Acqua Vergine head a little further on and you will see it spouting out in the fountain at the foot of the Spanish Steps. 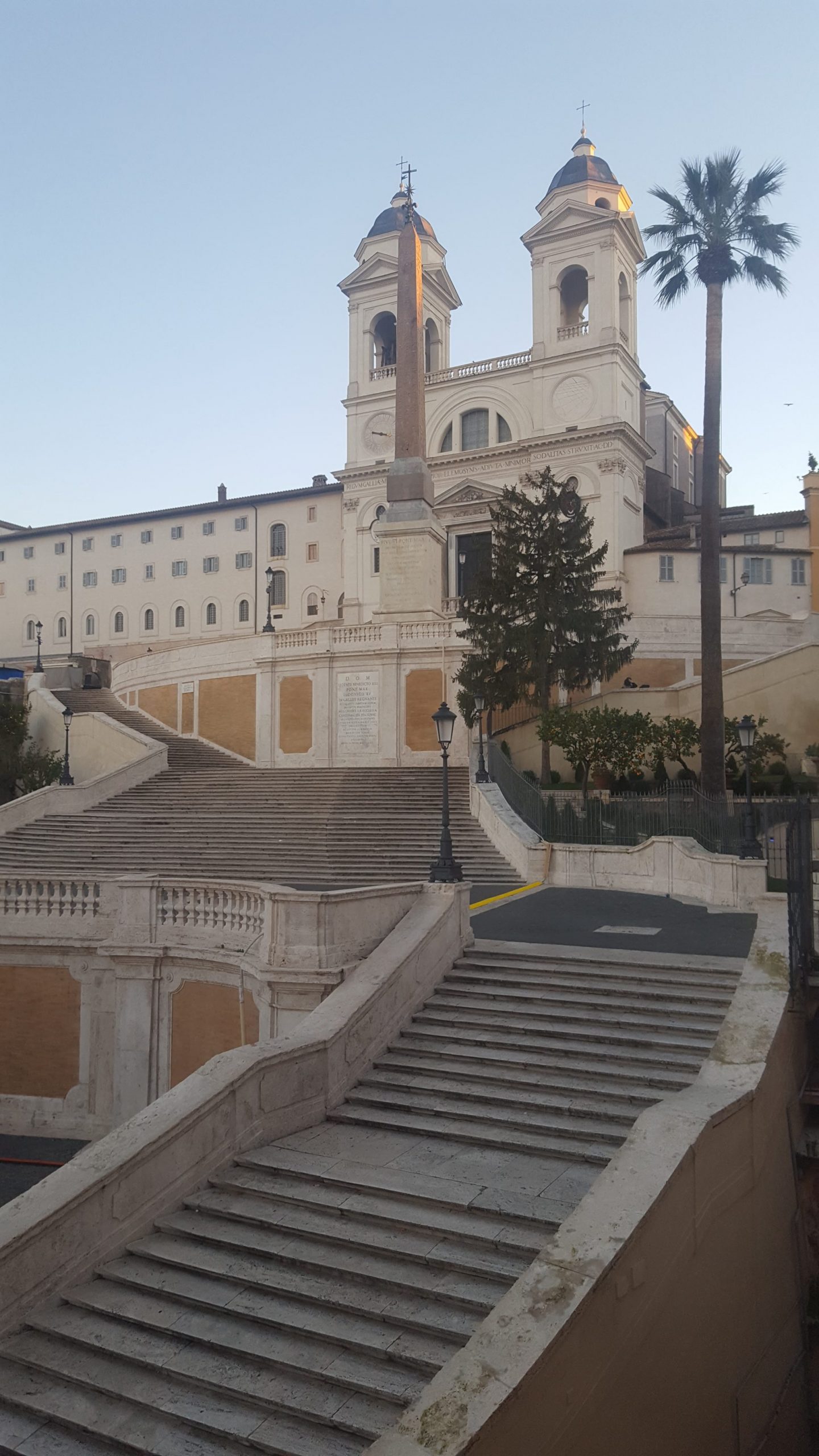 Just a set a of steps really, but what a set of steps.  Three flights of steps, each divided into three leading up to the church of the Trinita dei Monti.  People have been gathering on these steps just to soak up the Roman atmosphere for centuries.  You will find the steps empty only in the early hours after dawn when street cleaners with jets of water appear.  People just sit and chatter on the steps, licking ice creams or drinking beer and wine as the evening wears on.  We stayed right at the foot of the Spanish Steps in the Landmark Trust Keats and Shelley apartment, you can read about our stay by clicking on the blue words.

WALK ALONG THE BANKS OF THE TIBER 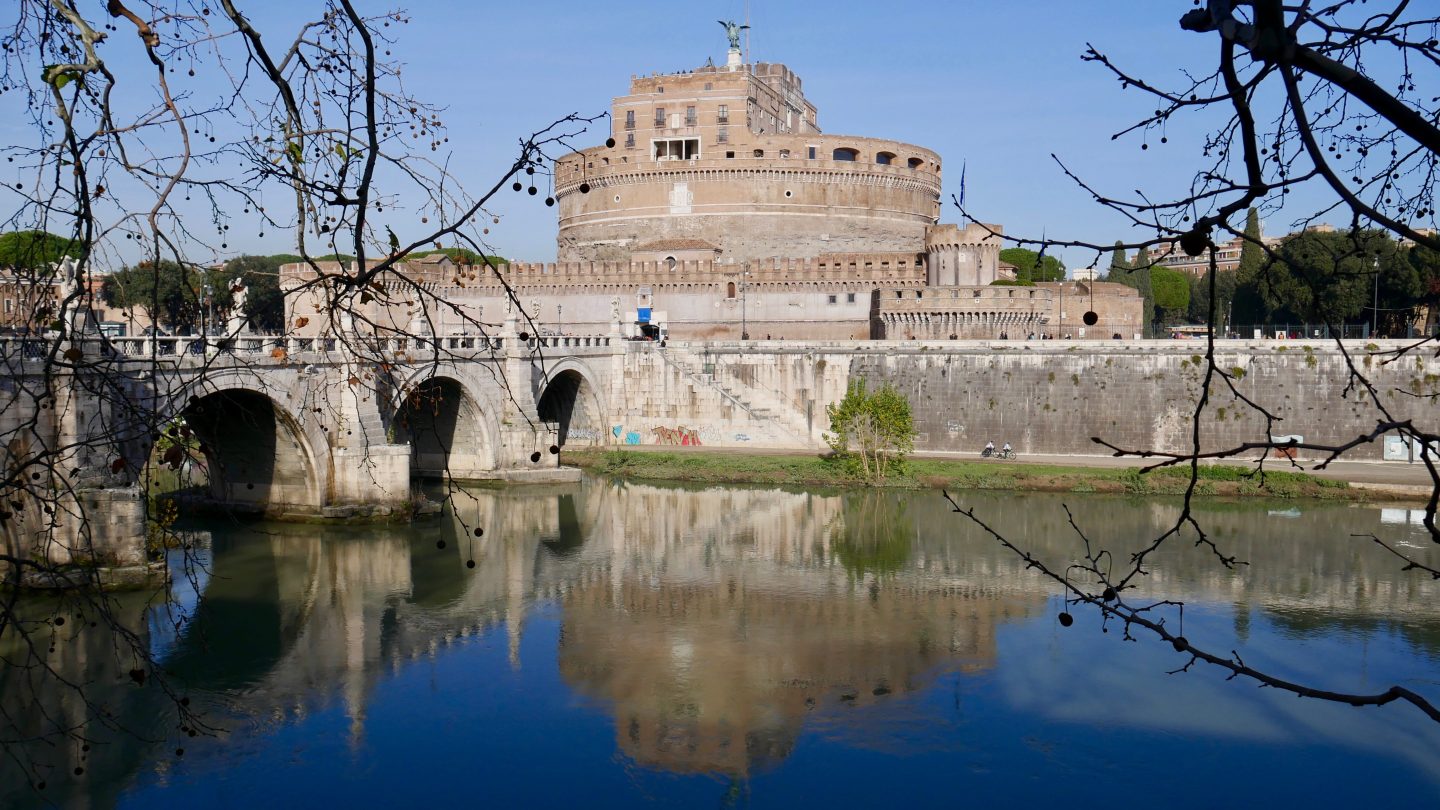 Rome is a small city and we walked pretty well everywhere, saving public transport for tired legs at the end of the day.  Strolling along the banks of the Tiber as we made our way from the Spanish Steps to the Vatican was fantastic.  You get great views across the river to Castel Sant ‘Angelo (opera buffs will know that this where Tosca throws herself down to her death) and on to St Peter’s.

VATICAN MUSEUMS AND THE SISTINE CHAPEL 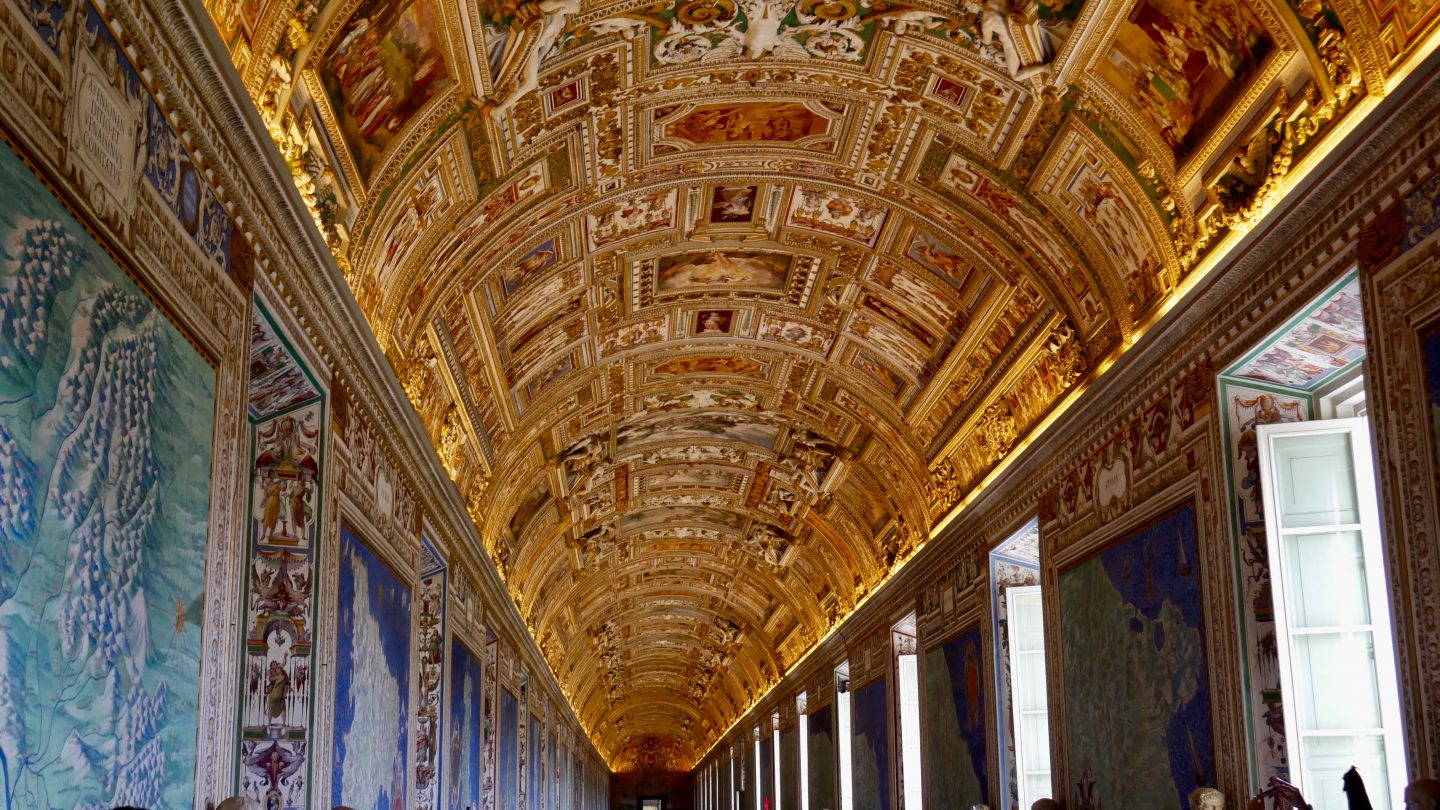 The Vatican is home to Pope as such not open to the public what you can see is the Vatican Museums and the Sistine Chapel.  Not Museum singular but Museums plural.  The Popes have acquired many works of art over the centuries and the collections range from ancient Egyptian right up the most modern of art.  You can choose to miss out some parts, but they are the least crowded and give you the best chance of actually taking in what you are seeing.  The teens suggested that it was the longest and most lavishly decorated queue in the world.  Whilst you filed past the magnificent map room many people didn’t look up from their phones, what they were there for was the Sistine Chapel which is amazing.  It is also packed.  You are meant to be silent and not meant to take photos but everybody is chattering and taking surreptitious snaps, whilst once every so often a guard will roar that this is house of worship and to be quiet.  I would have liked longer to look and less people, when I go again I think that I will book one of the early morning breakfast slots so that at least you are at the front of vast mass of people. 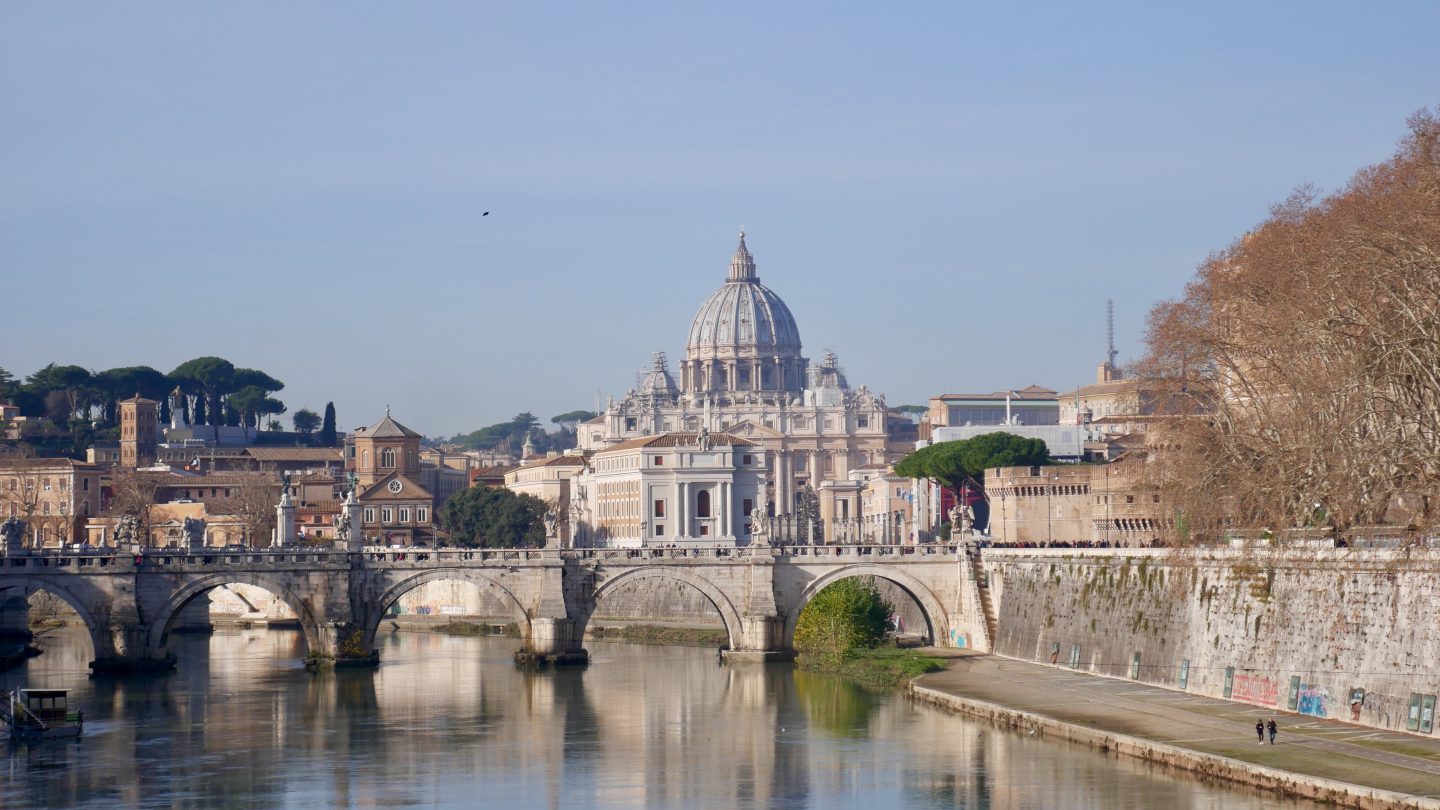 I have to confess that we didn’t get inside St Peter’s the queues were huge …. four hours long and they can be longer.  We were besieged by touts offering to sell us fast track tours including the Sistine Chapel, when we explained we already had tickets for the Vatican Museums they had an answer for that too.  We satisfied ourselves with looking at the outside of St Peter’s and wandering round the impressive square.  Next time I will either get up very, very early and be there when the doors open at 7am or buy an Omnia Card that includes fast track entry.

EATING AND DRINKING IN ROME 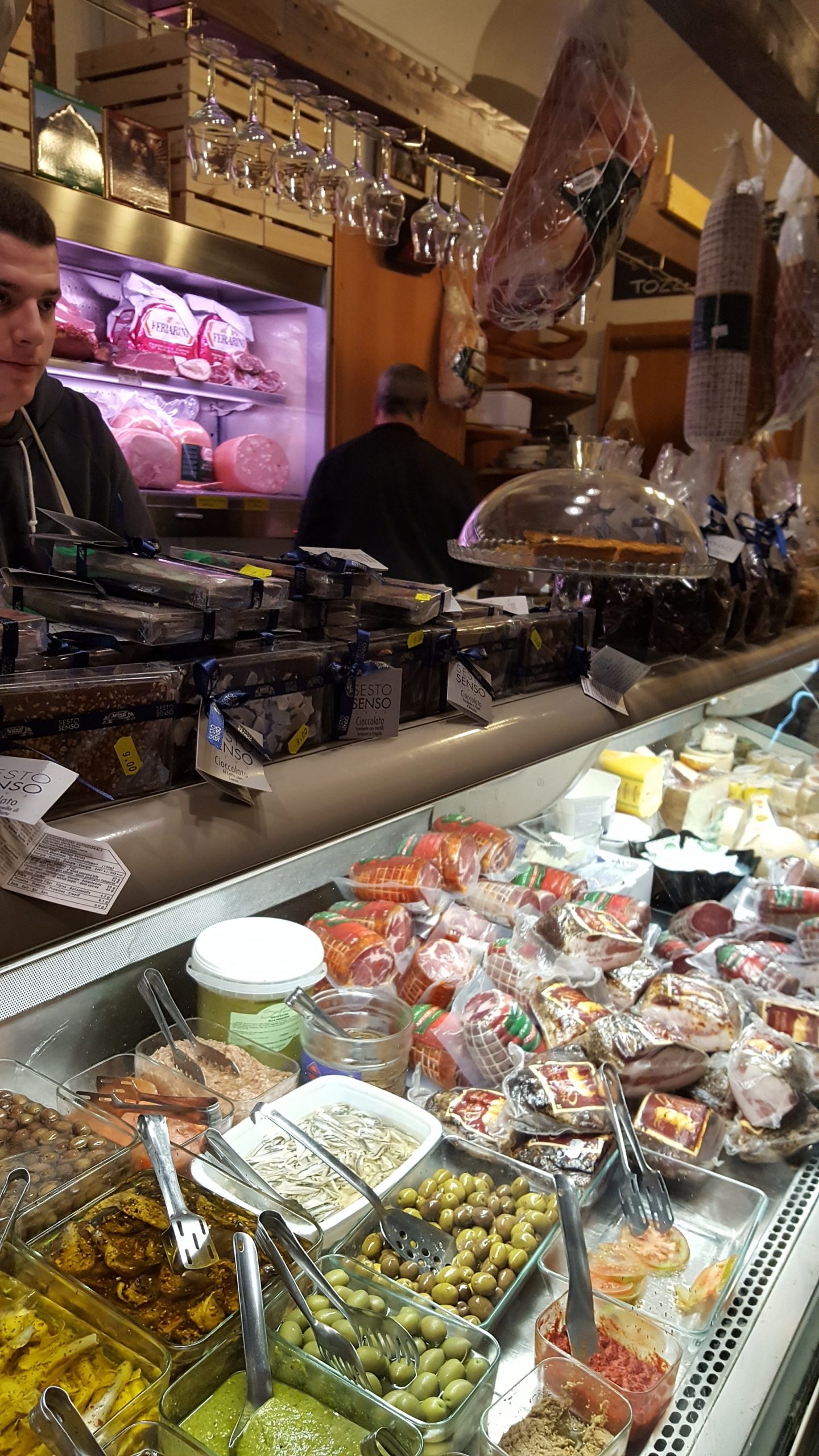 An important part of our visit to Rome was the food.  Breakfast was coffee and tiny cakes eaten whilst standing up.  We had frequent stops for Gelato or Ice-cream.  Every place we stopped for coffee and ice-cream was delicious.  For lunch we popped in delicatessens, pointed at the meat that we wanted, watched it being carved and placed in a panini and then ate them propped up against the narrow ledges at the side of the shop.  In the evening we at pasta.

There are two types of pass that visitors to Rome can buy the Roma pass and the Omnia pass.  Both passes include unlimited access to public transport.  The Roma Pass gets you into a selection of places the first two are free and the rest are discounted, including fast track entry to the Colosseum and the Forum but crucially not the Vatican Museums and St Peter’s Basilica.  The Omnia has entry to the Vatican Museums and the Sistine Chapel and fast track entry to St Peter’s and then entry to a selection of two other attractions.  There is a big difference in price the Omnia is €113 adult, €80 child for 72 hours and the Roma Pass costs €38.50 for 72 hours.  We were advised that there was no point in buying a child Roma pass as children get in free to most of the places on the card and that a travel card would be much cheaper.  You can, of course book everything separately, a 72 hour travel pass costs €16.50.  Bear in mind that most of what we did was free to get into and that we walked to most places, but on other hand putting a value on not queuing is hard to do!

Have you been to Rome?  What were your favourite things to do. 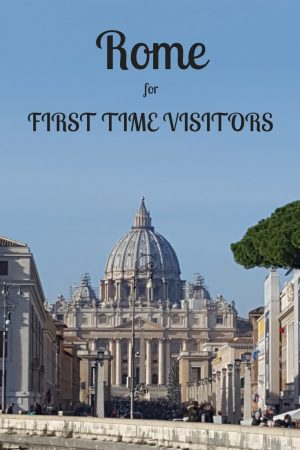