How lucky to be a woman in twenty first century. Sure we still don’t get paid the same and are still subject to unwanted advances but those are moving in the right direction. Most important of all we have the vote, we have a voice. So it was highlight to be being present when the Millicent Fawcett statue in Parliament Square was unveiled.  Scarlett from Diary of a Londoness and I decided that the unveiling of the first statue of a woman and by a woman, one hundred years after women got the vote, in Parliament Square was an occasion not to be missed.  Invited guests got the places nearest to the statue meaning that we were quite a way back. 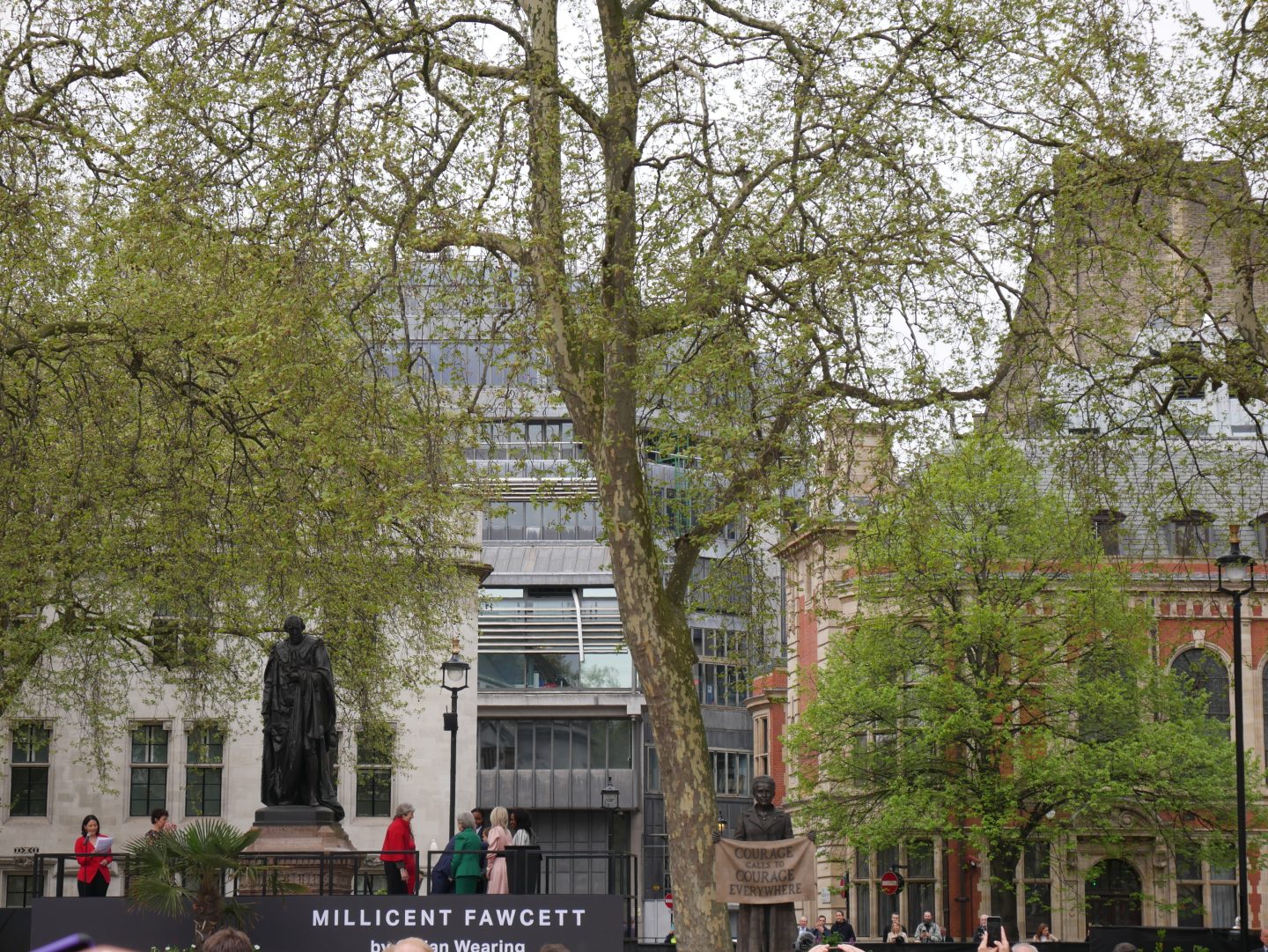 That we were gathered together to witness the unveiling of the Gillian Wearing statue was down to one woman.  Caroline Criado Perez was jogging through Parliament Square one day and wondered who the people were on the plinths and then realised that they were all men, she started the campaign and here we all were.  She made a speech at the ceremony pointing out that of all the public statues in the UK there are more of men called John than there are of women.  The atmosphere in Parliament Square was fantastic with lots of people dressed up for the occasion.  This lady was dressed as a Suffragist in honour of her grandmother who had chained herself to railings of the Houses of Parliament as part of the campaign to win Votes for Women. 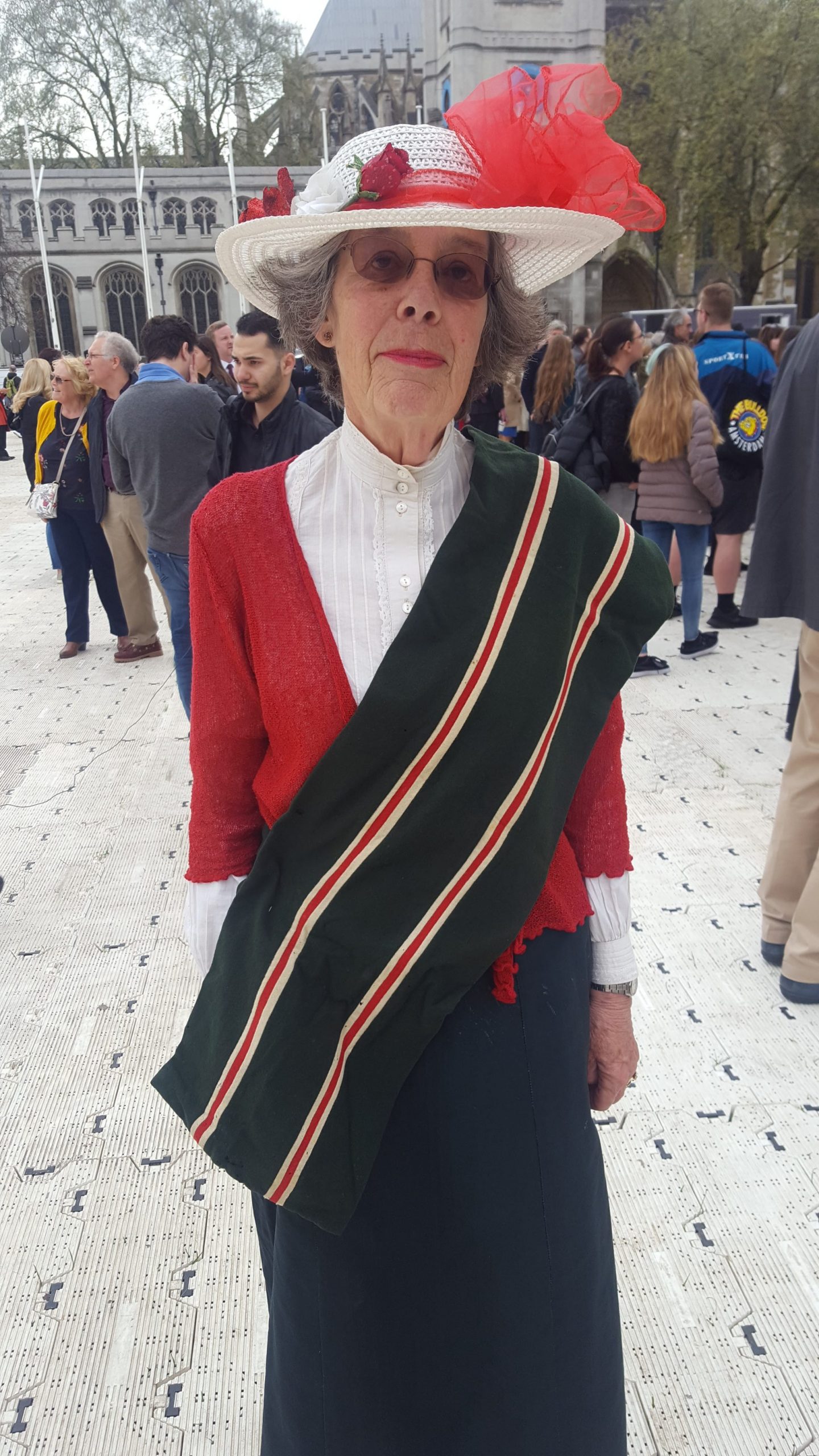 Millicent Fawcett was born in Suffolk a fact that was being celebrated by Caroline Stone, a councillor for the Suffolk town of Woodbridge. 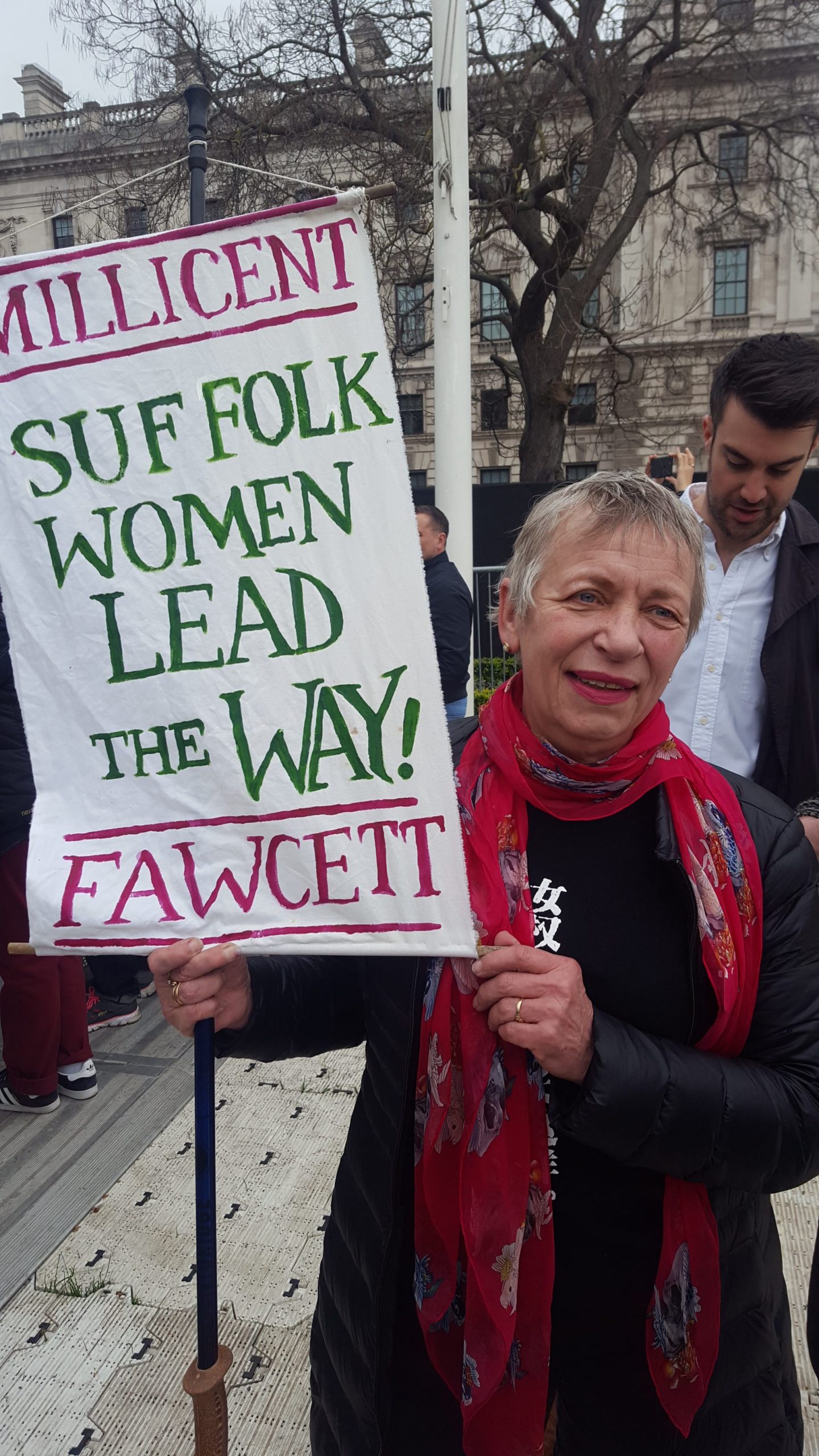 Later in the week I had a meeting just round the corner from Parliament Square and so I popped in to take a closer look.  The detail on the Gillian Wearing statue is amazing, the surface of the bronze looks like tweed.  Courage Calls to Courage Everywhere, are words taken from a speech that Millicent Fawcett made in the wake of the death of the suffragette Emily Wilding Davidson who threw herself under the King’s horse at the Derby.  Up close you can see that the words would have been stitched onto the banner. 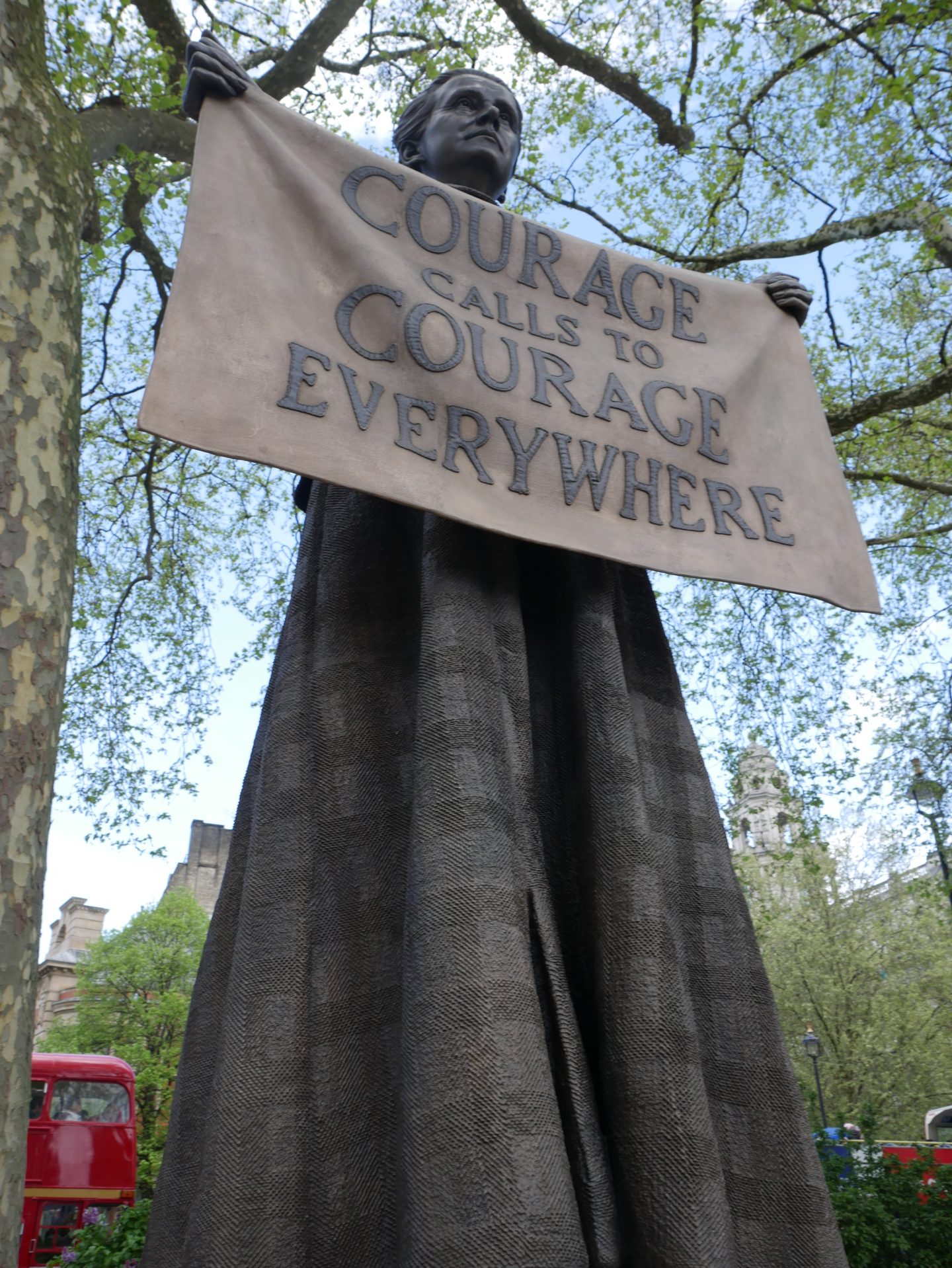 WHO WAS MILLICENT FAWCETT AND WHY DOES SHE DESERVE A STATUE IN PARLIMENT SQUARE?

Millicent Fawcett was a Suffragist who campaigned for Votes for Women.  Surely that should be Suffragette?  No, both Suffragists and Suffragettes campaigned for women to have the vote but they had very different ways of going about it.  Suffragists believed in peaceful protest and lobbying whilst Suffragettes opted for direct action including violence.  Millicent was President of the National Union of Women’s Suffrage Societies from 1897-1914, she made her first public speech in favour of women having the vote when she was only 22.  When she wasn’t campaigning for women to have the vote, she managed to co-found Newnham College at Cambridge.

Her parents must have been quite something because they produced two extraordinary daughters.  Whilst Millicent was at the forefront of the Suffragist campaign and forming ground breaking colleges at Cambridge, her sister, Elizabeth Garrett Anderson, was busy becoming the first woman in Britain to qualify as a physician and surgeon.  She also founded a hospital to treat women, where the teens were born fifteen years ago this week: then, it was at the Elizabeth Garrett Anderson Hospital.

WHICH MEN HAVE STATUES IN PARLIAMENT SQUARE? 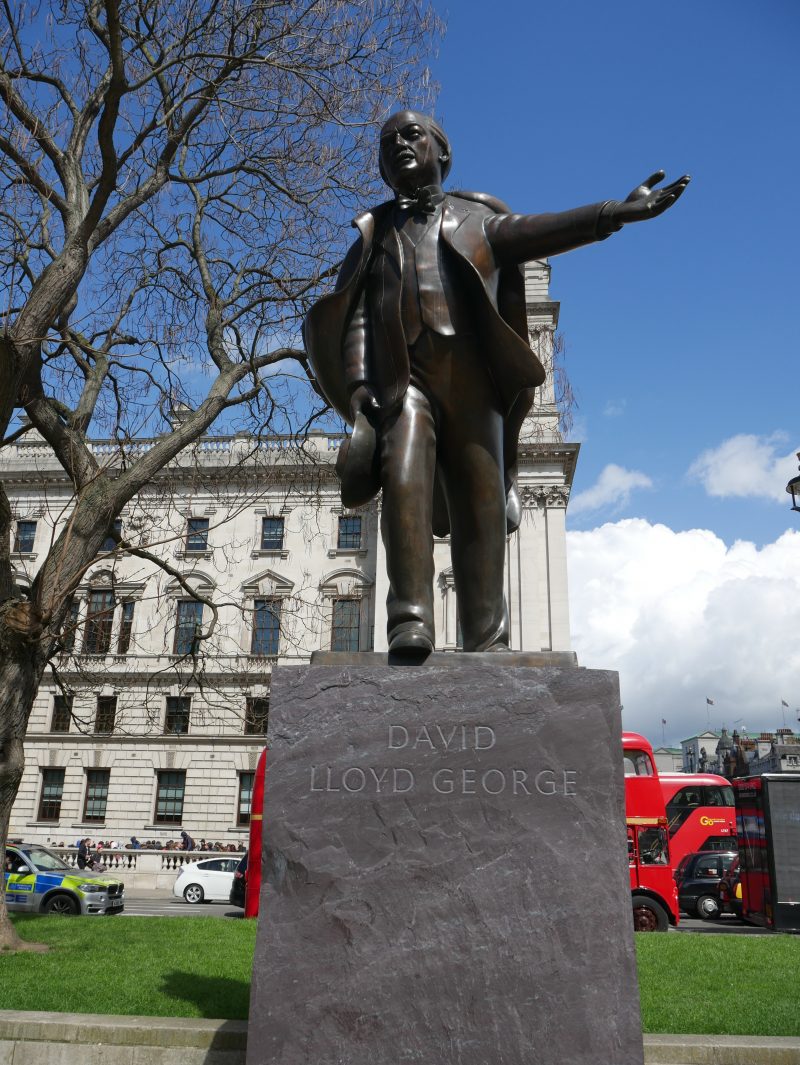 Millicent Fawcett is the twelfth person to have a statue in Parliament Square. The other eleven are all men, there are eight Prime Ministers, two Presidents and one Independence leader but who are they? I confess that I could not have named them all before last week

This is probably the statue that most people would know stands in Parliament Square. Winston Churchill was Prime Minster twice between 1940-45 and 1951-55. He was the leader who saw the UK through the dark years of the Second World War.

Another wartime Prime Minister this time the First World War, David Lloyd George was Prime Minister from 1916 to 1922. As befits his Welsh origins he stands on a plinth of Welsh slate.

Another Prime Minster but this time of South Africa 1919-1924 and again 1939-48. He was the only man to sign the peace treaties that ended both the First and Second World Wars.

Palmerston started his political career as a Tory but defected to the Whigs. He served three terms as Foreign Secretary, did a stint as Home Secretary and became the first Prime Minister the newly formed Liberal Party in 1958, a post he held for less than a year.

The Earl of Derby was Prime Minister no fewer than three times, one of only four British Prime Ministers to have had three or more separate stints in the job. Well they were all really, really short stints the first in 1852 was just ten months, in 1858 he managed fourteen months and in 1866 he lasted for twenty two months. Why does such a short lived Prime Minister deserve a statue? It was he who steered the 1867 Reform Act through Parliament which gave the urban working class male the vote for the first time in England and Wales.

Victorian history loomed large over my school days and the battles between Disraeli and Gladstone featured prominently. Disraeli was Prime Minister twice. His first stint was very short just ten months in 1868 but his second occupation of 10 Downing Street lasted much longer 1874-1880. When he wasn’t busy running the country Disraeli was a sucessful novelist.

Another Prime Minster with two stays at 10 Downing Street. The first was a mere five months when William IV was on the throne, fast forward six years 1841-1846 and he was back again but by this time Victoria was Queen. When he was Home Secretary he established the Metropolitan Police hence their nickname of Bobbies.

George Canning is the Lady Jane Grey of politics, he holds the record for the shortest period in office of any British Prime Minister at 119 days. Other career highlights included getting into such a knotty political scrap with Lord Castlereagh over the deployment of troops (Canning had promised them to the Netherlands but Castlreagh sent them to Portugal) that the two fought a duel on Putney Heath complete with pistols.

Abraham Lincoln was President of the United States of American 1861-1865, a stint that ended with his assassination. He held office at the height of the Civil War and is the man credited with abolishing slavery in America. This statue is a replica of one in Chicago and was a gift of the American ambassador to the Court of St James.

Imprisoned for 27 years for his part in the struggle to end apartheid in South Africa, when he emerged from jail he led the peaceful movement to finally end white rule and became President of South Africa 1994-99.

So much for the men?  If there was to be another statue in Parliament Square who would you like to see atop the plinth and why?

While you are in the area why not visit the Palace of Westminster or relax on the beanbags at the Banqueting House?