Can we go to the beanbag place?  Is a question often asked in our household.  Translated that means can we visit the Banqueting House please.  I’m ashamed to say that it isn’t the ground breaking architecture or the magnificent Rubens ceiling or even the historical importance of the building that lures us back time after time but the lure of beanbags that scatter the grand hall. 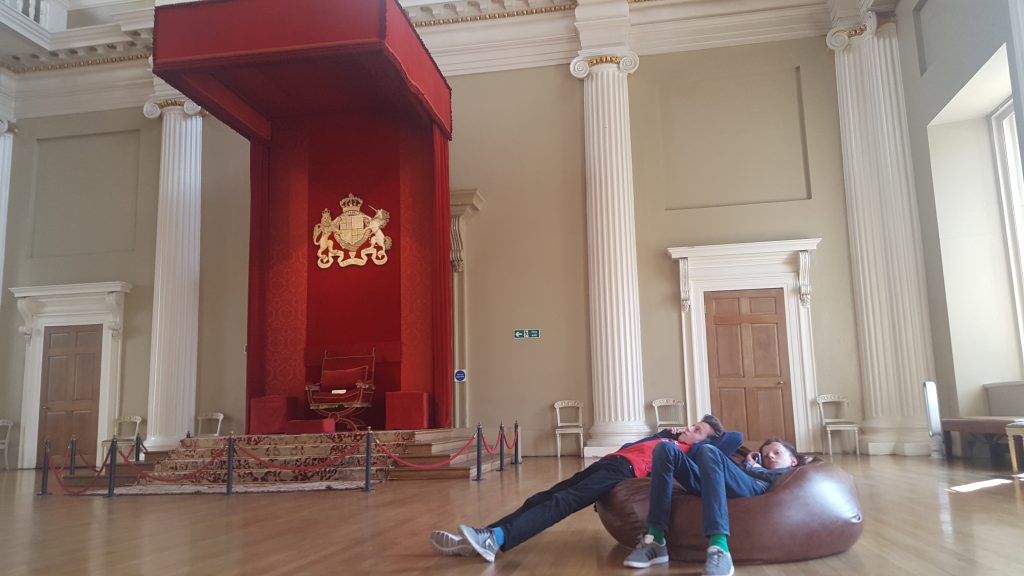 Banqueting House is the only remaining part of Whitehall Palace, it was the first building that Inigo Jones designed using the Palladian principles that he had seen and admired in Italy.  James I commissioned it to replace an earlier wooded banqueting house to host not only banquets but masques and royal receptions.  Just 27 years after it was completed James’ son, Charles I climbed these stairs on the way to his execution. 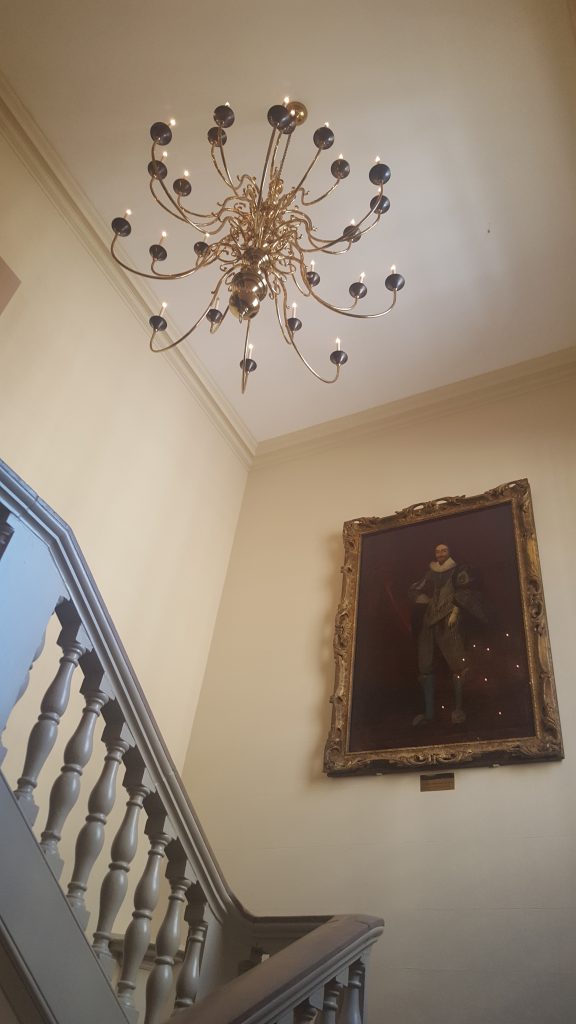 You start your tour in the basement watching a short film explaining the history of the building and the historic events that have taken place here.  It was not only the site of the execution of Charles I but also the venue in which William and Mary had the Bill of Rights read to them before they ascended to the throne.  As you would expect this is not any old basement but a rather fine undercroft. 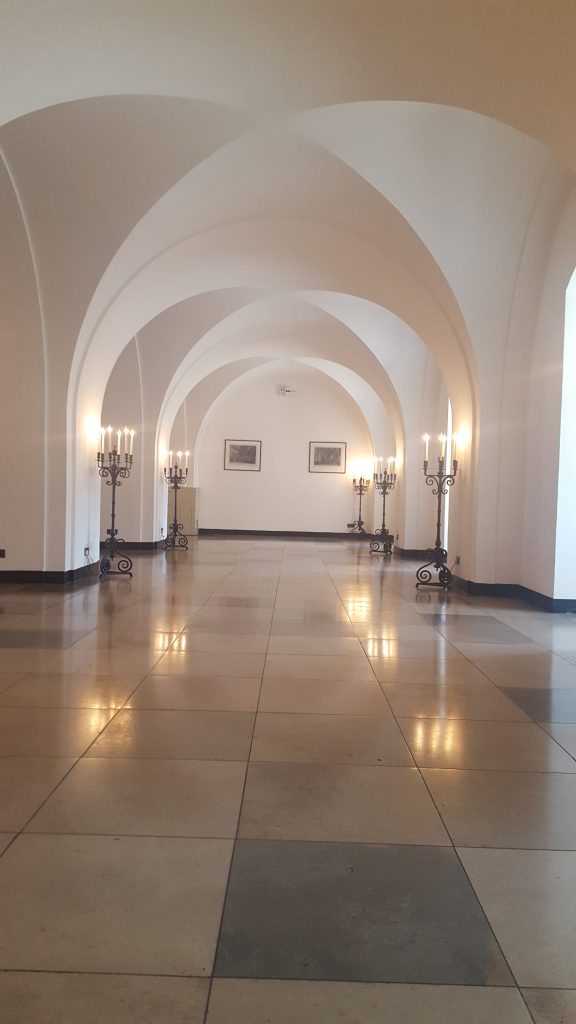 Lolling around on beanbags, whilst listening to the audio guide that comes with the entrance fee, is not the only way to admire the Rubens ceiling you can also opt to use the magnifying mirrors that also dot the floor.   Charles I asked Rubens to come up designs that glorified his father.  Rubens drew up the designs in London and then decamped back to his studio in Antwerp to complete the work.  When the finishedcanvases were unrolled ready for installation it was with horror that it was realised that they wouldn’t fit. Careful measurements had been taken, both Belgium and England used feet and inches but each country used a different length for what they called a foot.  Scissors and paste had to be deployed to make significant changes before they would fit. 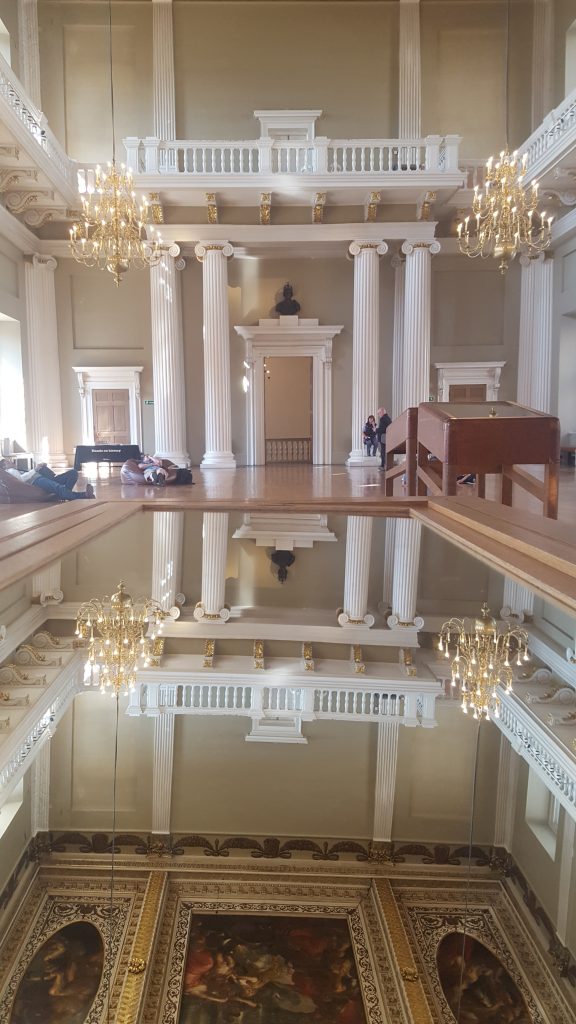 For many years we have had family membership of Historic Royal Palaces, this means that for a one off payment of £100 a year  we can visit Hampton Court, Kensington Palace, Tower of London and Kew Palace as well as the Banqueting House as often as we like.  As we live less than an hour away from all of these we have made good use of our membership and made just popping in to loll on the beanbags an easy thing to do. 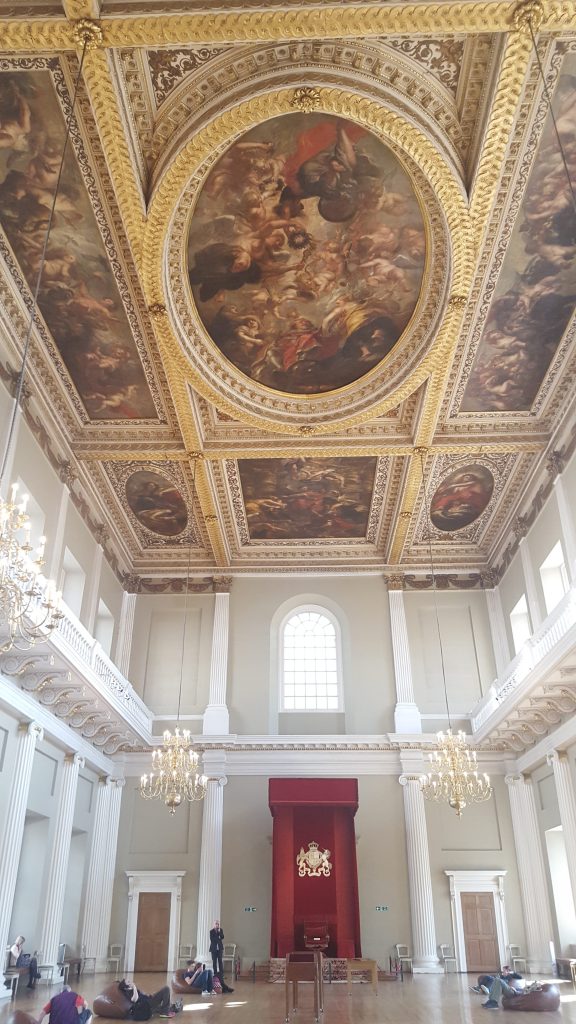 Ground breaking architecture, history oozing out of its pores, stunning ceiling, comfy beanbags and some pretty luxurious loos the Banqueting House has it all.  All that it lacks is a café, but that is no problem as a short walk away in St James’s Park has a café.  To get there you walk over the road past the mounted horse guards (if you lucky you might be in time for the changing of the guard) over the parade ground and hey presto there is the park.  Turn around and you will be rewarded with a  stunning view back over Whitehall.

We are able to visit the Banqueting House on a whim as we have Historic Royal Palaces membership, why not take a look at my guide to London Museum Membership.