If you had a Victorian home set in 10 acres of landscaped and manicured grounds would you let your 24 year old son knock it down in order to build a replacement in the newest and somewhat experimental style?  Once you have agreed to the demolition, it becomes clear that the new build will be so expensive that you will have to sell the ancestral Welsh village to pay for it: would you still say yes?  That is exactly what Commander Alban Gwynne did and The Homewood is the result. 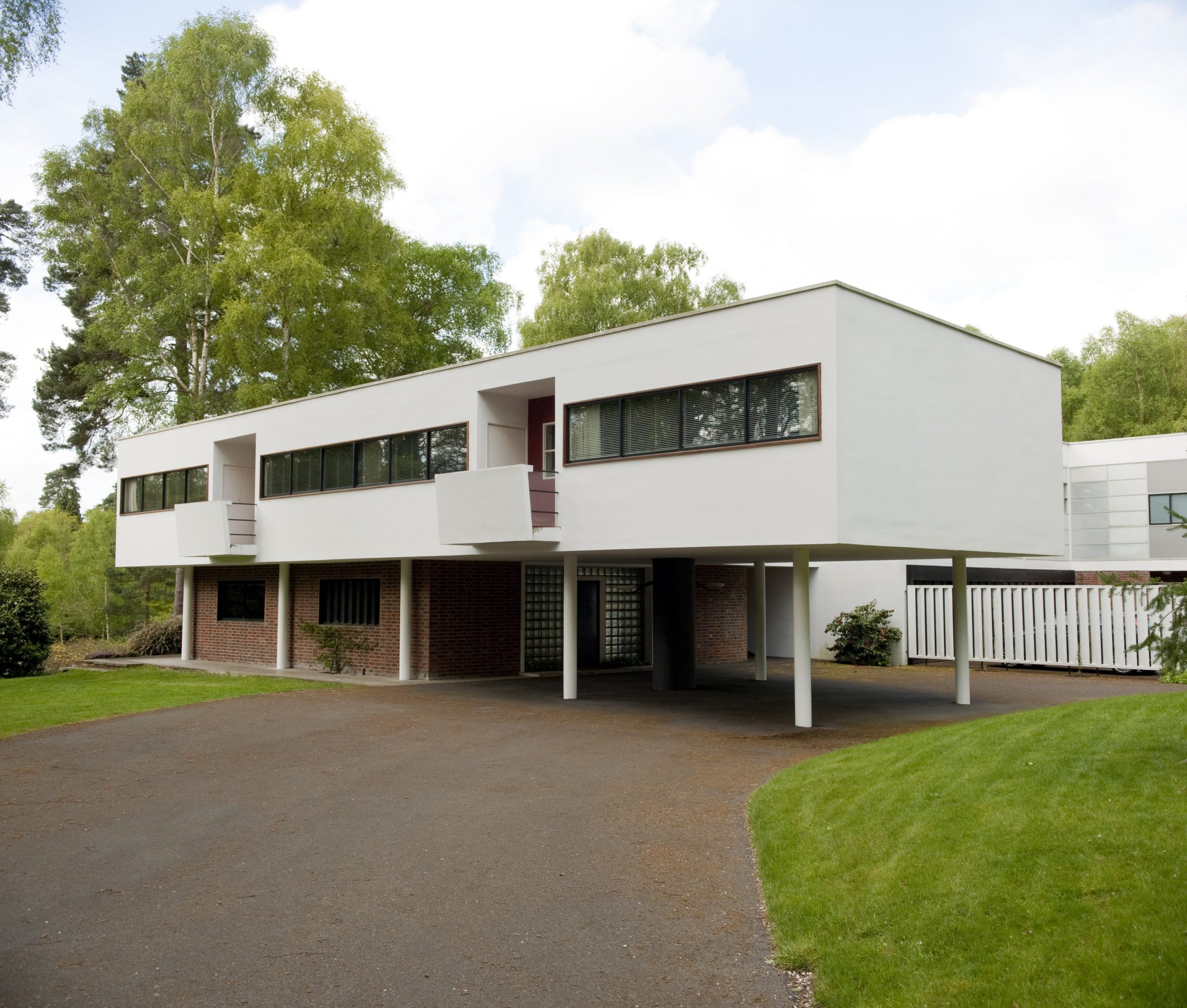 As you enter the grounds of The Homewood you catch a glimpse of the house seemingly floating above the garden.  From the outside the house is concrete, glass and unforgiving angles.  The front door is beneath a canopy created by the bedroom wing held up with four impossibly slender piloti columns. Once inside the light floods in from the glass bricks that surround the door and the wall of glass overlooking the garden.  Turn to the left and you are in the architect Patrick Gwynne’s study.  Here he would design other buildings and receive clients.  In this room, as with all the others in the house, clever built in cupboards elegantly hide the clutter of everyday life.   Dominating the room is a gigantic desk that looks like a control panel from the set of 1960’s sci-fi tv show.  It balances on a central column that neatly hides all the cables, one end is given over to a drafting table and the other to a surface suitable for writing or typing. 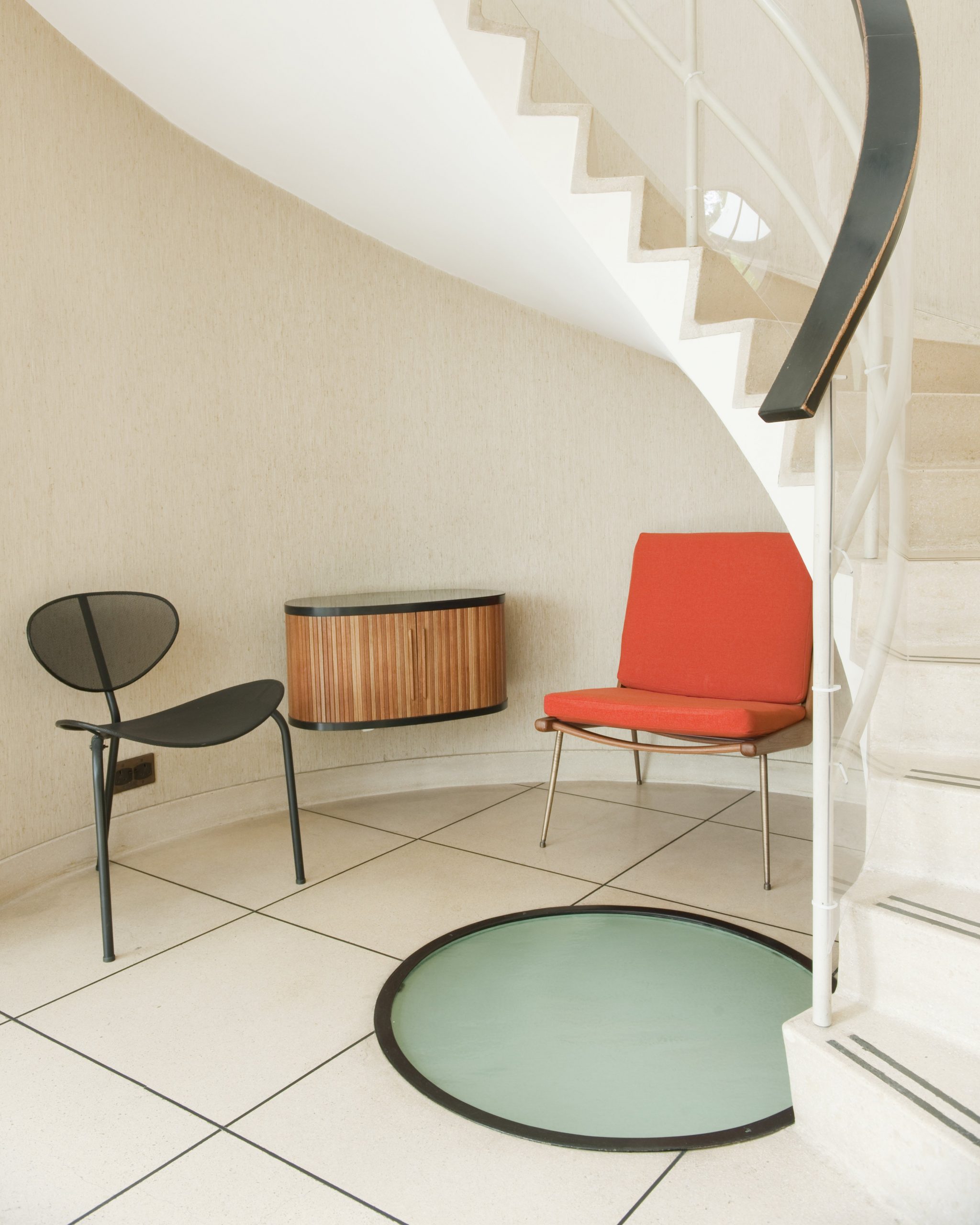 Access to the main living quarters is up a stunning elliptical staircase lit from below by an uplighter sunk into the floor.  Down light is provided by a Victorian Bristol blue glass chandelier purchased by the Commander for the house; his son must have liked it well enough to keep it in place for the next sixty years.  The bedrooms can be found in the east wing, to today’s eye they are curiously small and the single bed that the architect slept in from when he was 24 until his death at 90 seems positively monk like. On the other side of the stairwell you are confronted with a mirrored wall punctuated by a padded folding white leather door.  The room revealed could be an illustration from any interiors magazine, a vast sprung maple floor stretches out in front of you, one wall is given over entirely to windows, five distinct groupings of furniture create inviting places to sit and admire the view, chat to friends, cosy up by the open fire or simply work at a desk with an awe inspiring view.  I want to live the life that this room whispers of; elegant sophistication with cool friends who drop by for drinks. 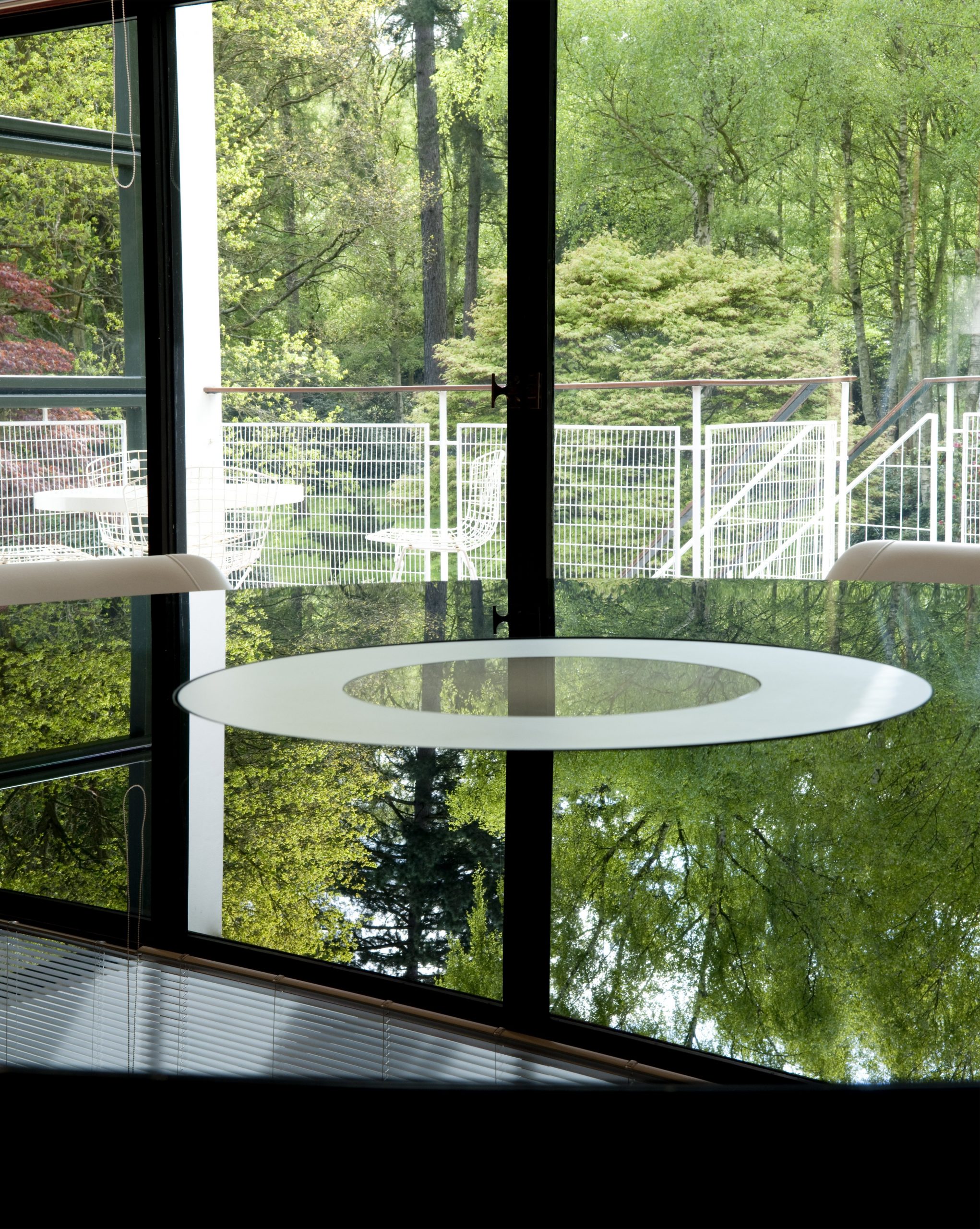 Ancestral portraits line the dining room they and the chandelier are the only truly retro objects in the house.  Granted the grand piano that lurks beneath the portraits is off traditional design, but I have yet to see a modernist grand piano.  The circular dining table was designed by Patrick Gwynne and has multi-coloured lights set into the surface, controlled via knobs at the hosts place setting and he would have altered them as the evening progressed. We don’t get to see the kitchen or the former servants’ quarters as they are currently occupied by the tenants of the house.  When Patrick Gywnne arranged to leave the house to the National Trust he did so on the condition that it would continue to be a family home and that the public would be able to see the house on at least one day a week for six months of the year.  The Trust have honoured his wishes and if you would like to see his house then it is advisable to book ahead, tours start from nearby Claremont Landscape Garden. 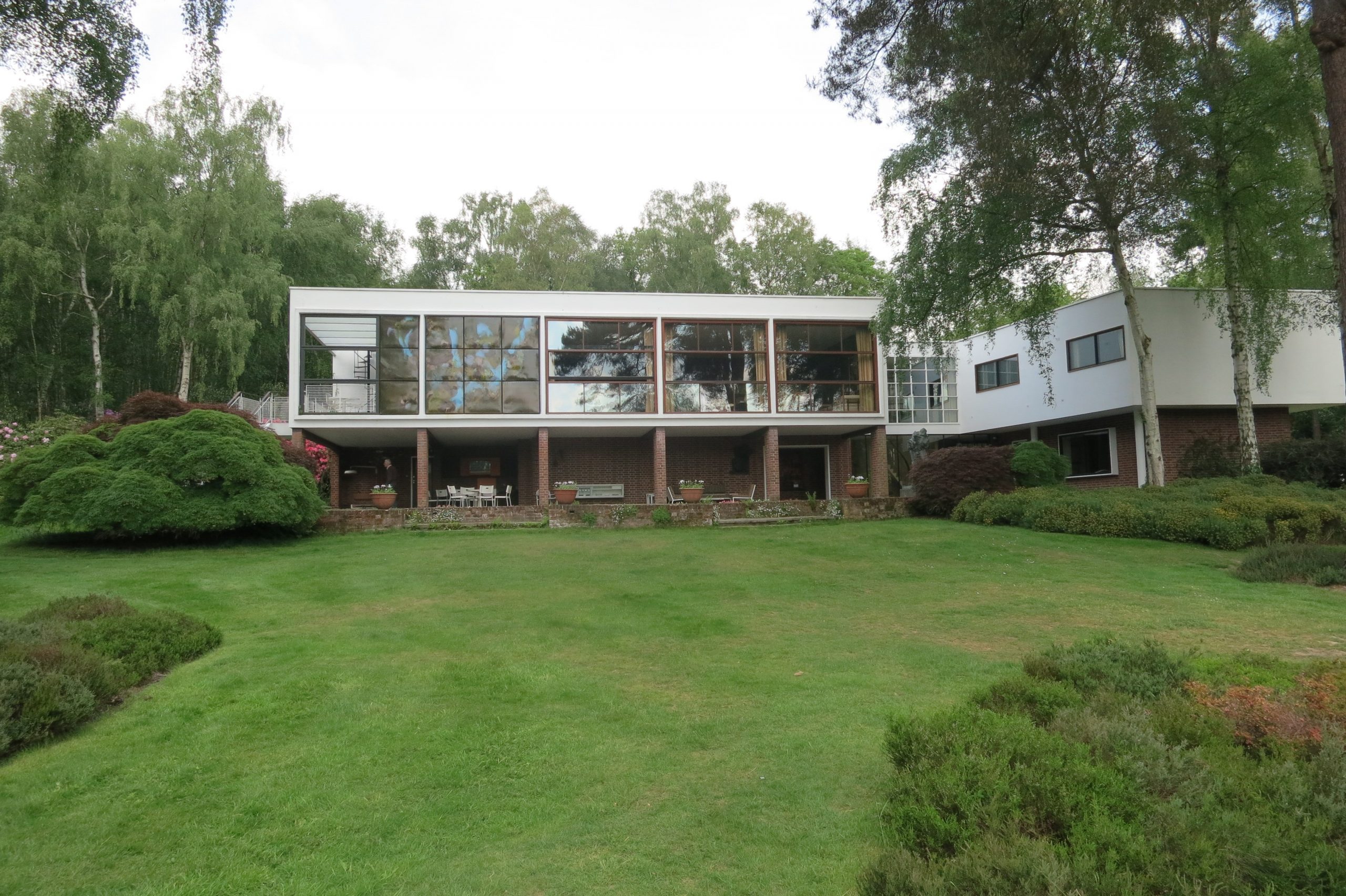 The garden, at the Homewood is an integral part of the house, every room has large windows that seem to bring the outside in and the house is cleverly aligned so that the rooms get the sun when they will be most used, The bedrooms face east for the morning sun, the dining room west for the evening and Patrick’s study  has windows facing both ways for the best of the day.  We were fortunate and saw the garden when it was ablaze with rhododendron and azalea flowers, as well as new sprung acer leaves, all reflected in the many garden ponds.  I would imagine that autumn would be a fine time to see the garden as well.  The most amazing thing about the Homewood is that it was designed and built in 1938 by a young man of 24 who had never designed a house before, at that  time the Home Counties were being covered by a rash of  Tudorbethan houses like my own a few miles down the road.

THE HOMEWOOD
Portsmouth Road, Esher, Surrey
Open on Fridays or Saturdays on pre-booked tours in the summer.  Entrance: £12.60 plus an additional £4.50 for the minibus shuttle payable even by NT members.