The big draw in Sant Cugat des Valles in the monastery with one of the finest cloisters in the whole of Europe.  Whilst strolling along the streets you can see the exteriors of some fine modernist houses built at the turn of the century.

MONASTERY AND ABBEY OF SANT CUGAT

You’ll have seen monasteries before, but the monastery at Sant Cugat is special.  It has one of the most complete, best-preserved cloisters in Europe.  If you are a fan of Romanesque an Gothic architecture this is the place for you.  The monastery started life in the 5th century as a church dedicated to Sant Cugat, expansion began in the later 11th century and it became the most important monastery in the country of Barcelona. 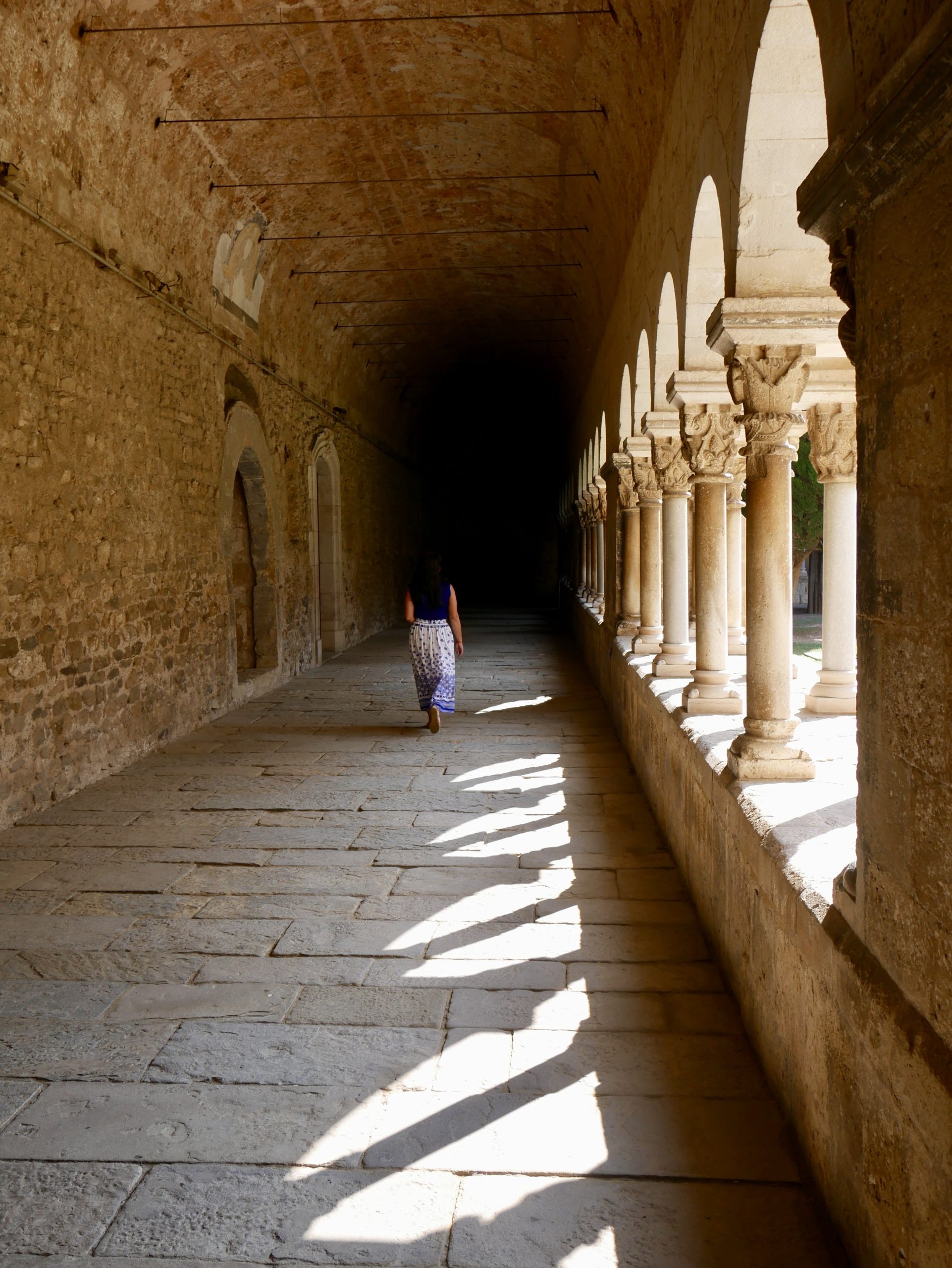 The cloister is stunning. It has 72 pairs of columns, each headed with a different carved corbel.  Each side is thirty metres long, creating the perfect place for monks to stroll and contemplate shaded from the hot sun.  A masterpiece of Romanesque architecture, I confess that I would like to spend an afternoon leaning against one of those pillars, lost in a good book.

Next door the abbey church is Gothic.  You walk in through a great carved arch with a rose window above it. 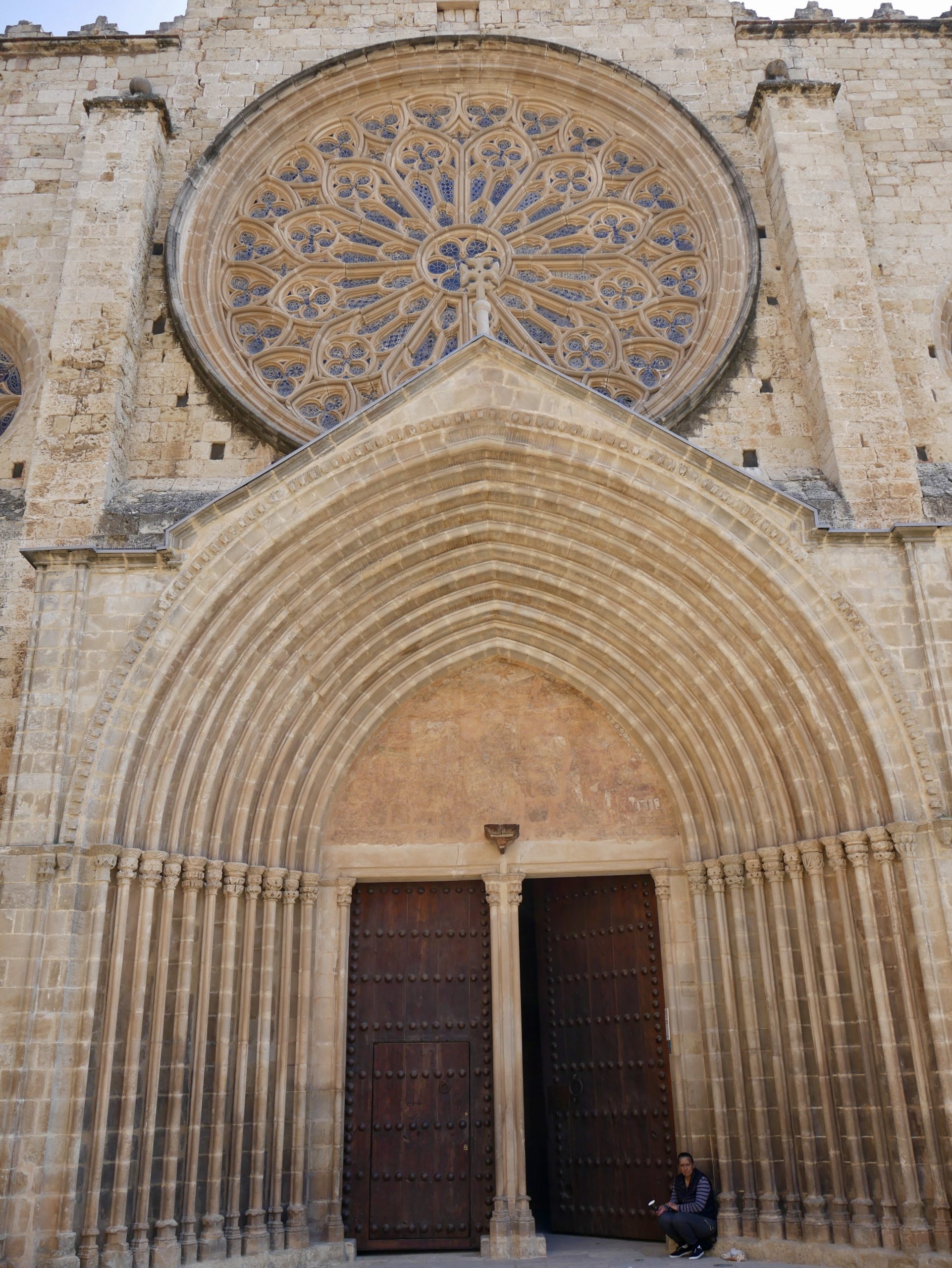 Once inside, that large (over 8 metres) rose window casts a coloured glow over the interior. 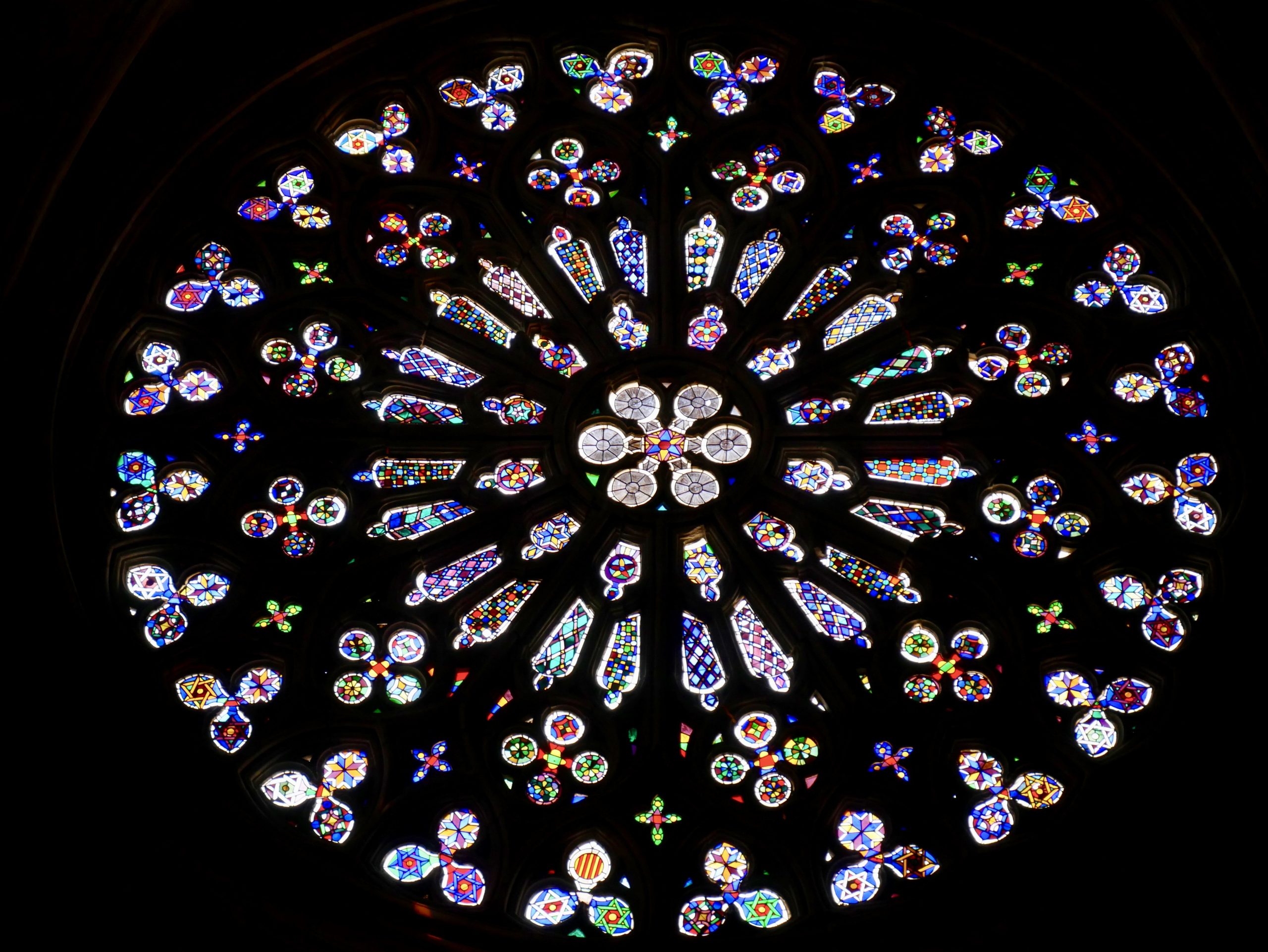 One of the side alters has a fine Gothic altarpiece dating from 1375, known as the Retablos de todos Santos or Altarpiece of All Saints by Pere Serra. 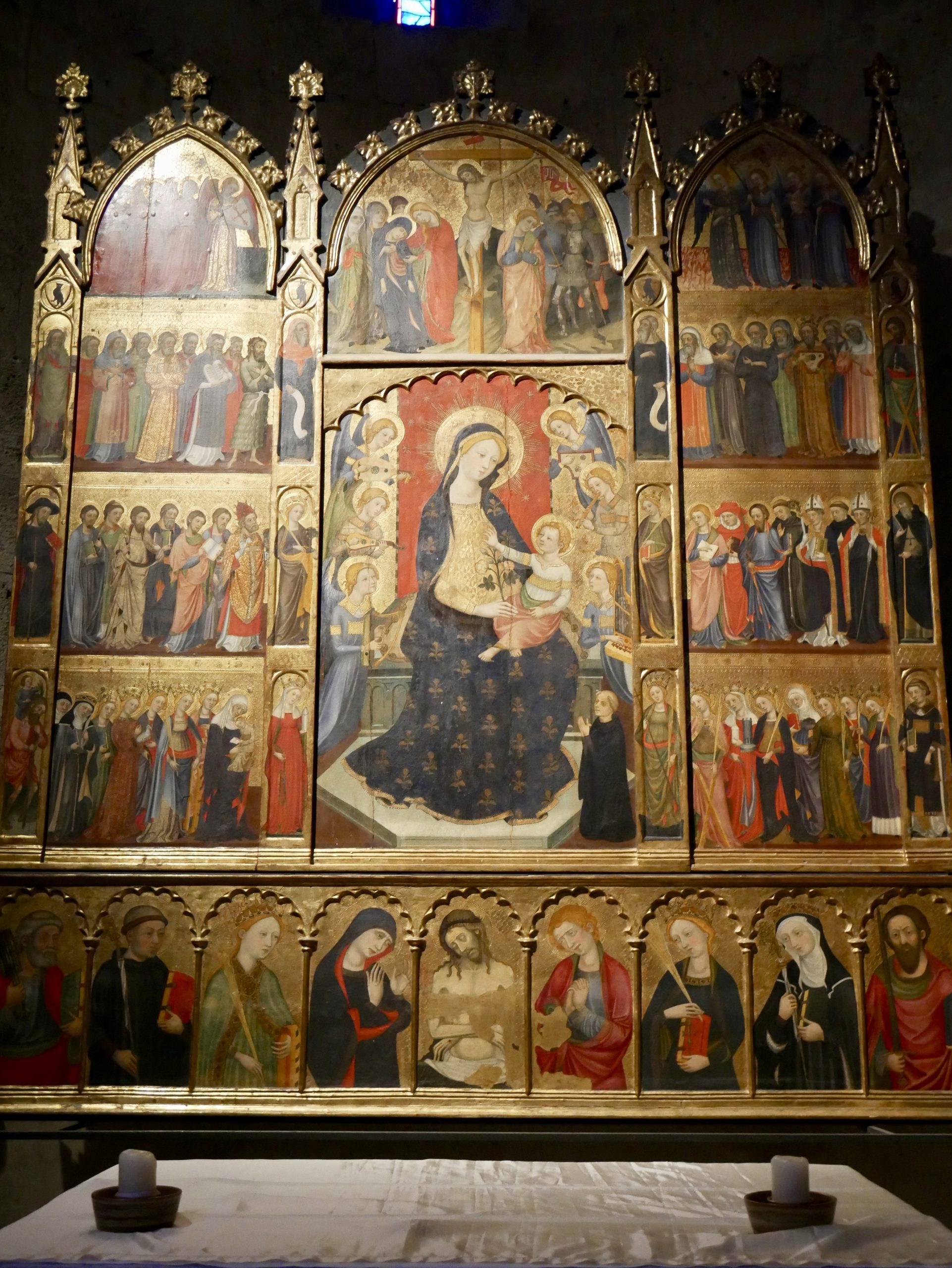 If you are lucky your visit will coincide with one of the days when you can climb the bell tower for €8.  We were lucky enough to make the ascent when we visited, it is not for the fainted hearted, involving many steps up an increasingly narrow spiral staircase.  Once you get to the top, the views make everything worthwhile, you can see the cloisters far below and the rolling hills stretching out as far as the eye can see. Details of ascending the bell tower can be found on the monastery website here. 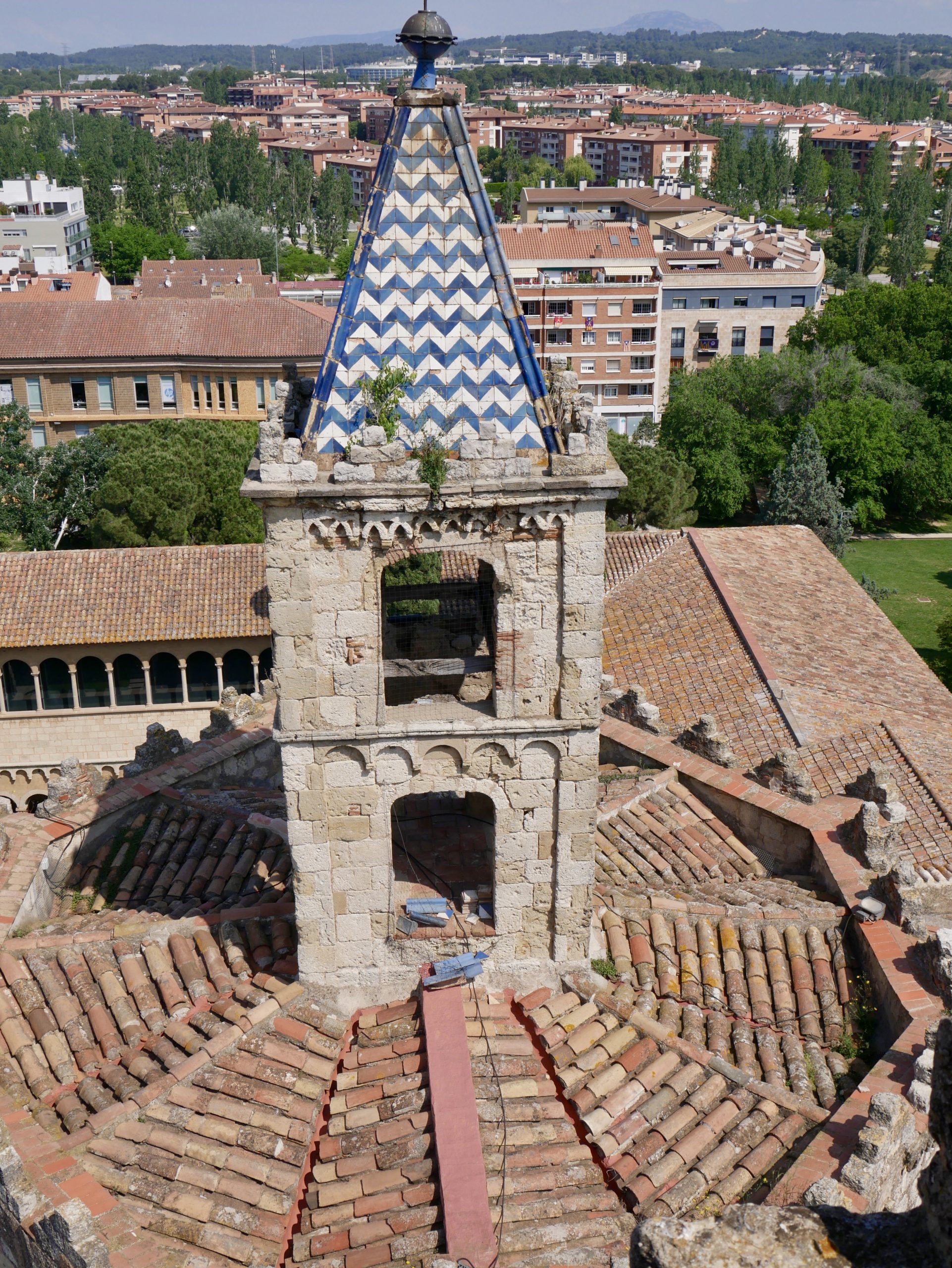 WHO WAS SANT CUGAT?

Sant Cugat is also known as Saint Cucuphas.  He was born into a Christian family in Tunisia and was thought to have been one of the deacons in Carthage before heading over to Barcelona to convert the area to Christianity.  This didn’t go down well with the Roman Emperor Diocletian and Sant Cuga was taken prisoner.  Twelve strong soldiers were tasked with whipping him, tearing his skin with iron nails and letting scorpions sting him.  Once these were undertaken he was roasted alive after being covered in vinegar and pepper.  After all this he was still alive and so was thrown into a cell, in the morning his twelve torturers discovered him sitting up illuminated by a heavenly light.  Unsurprisingly the twelve instantly converted to Christianity but the Roman Prefects still wanted Sant Cugat dead, so they opted for the simpler method of cutting his throat. It is said that the monastery lies on the site of his martyrdom.

One of the things that I love doing is meandering round a market.  El Mercat Vell on Plaça St Pere is a covered market open most days, perfect for picnic provisions.  If its an outdoor market that you want, make sure you visit on a Thursday when all manner of stalls from fruit and vegetables to straw hats set up shop on the Plaça d’Octavià just outside the great west door of the Abbey.

If vintage shopping is your thing then head for Mercantic.   Housed in an old pottery factory over 200 small shops offer all manner of vintage things that you had no idea you needed until you saw them. 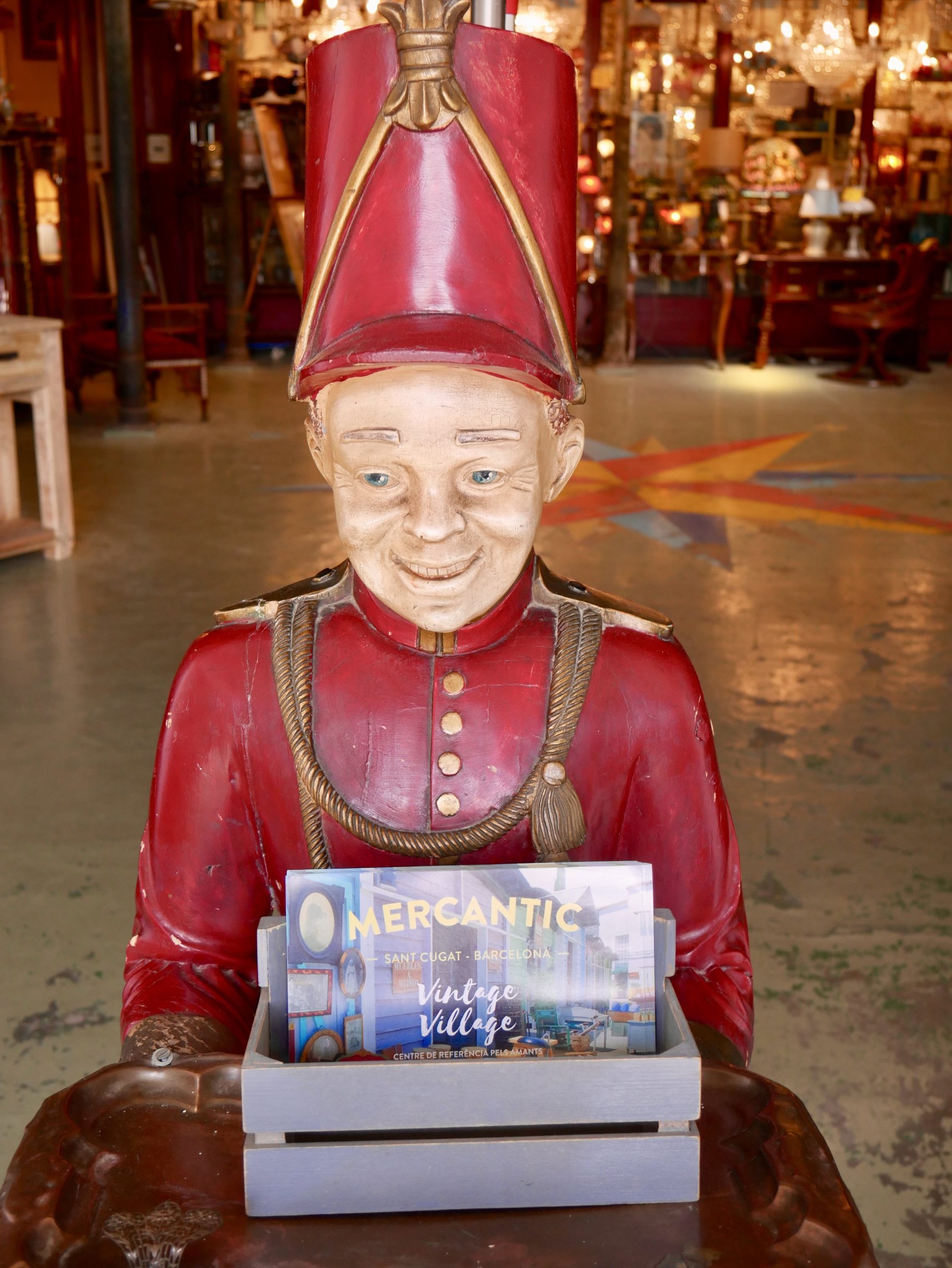 How I didn’t come home with one of this lamps is a mystery to me and a relief to Mr CW. 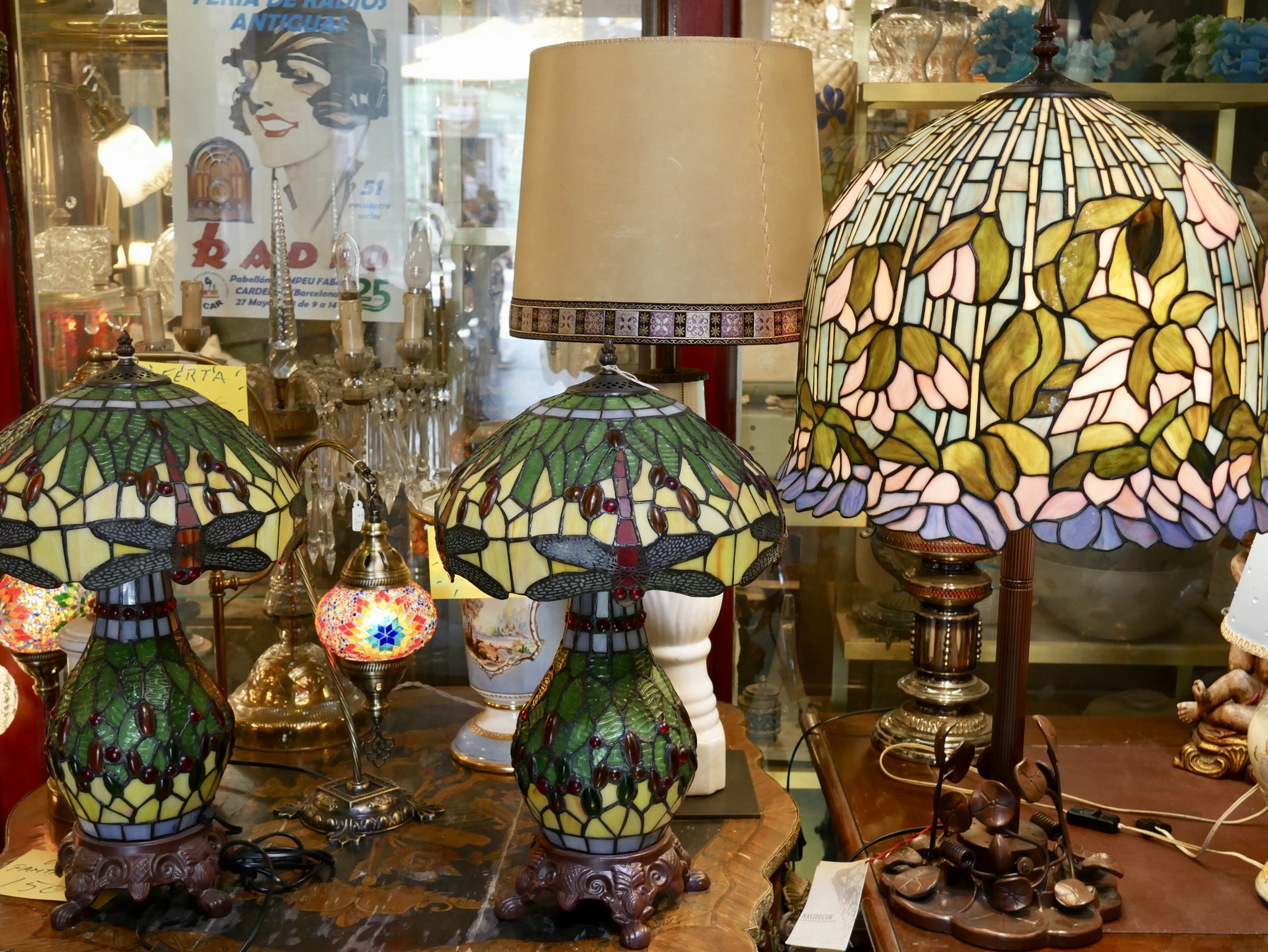 If books are your thing, books are very much my thing, then El Siglo is for you.  It has over 150,000 books, the biggest selection in Spain.  Many of the are second hand but the latest literature is on offer to.  Don’t read Spanish?  Don’t fret there is an English language section to.  I could happily spend hours and hours here. 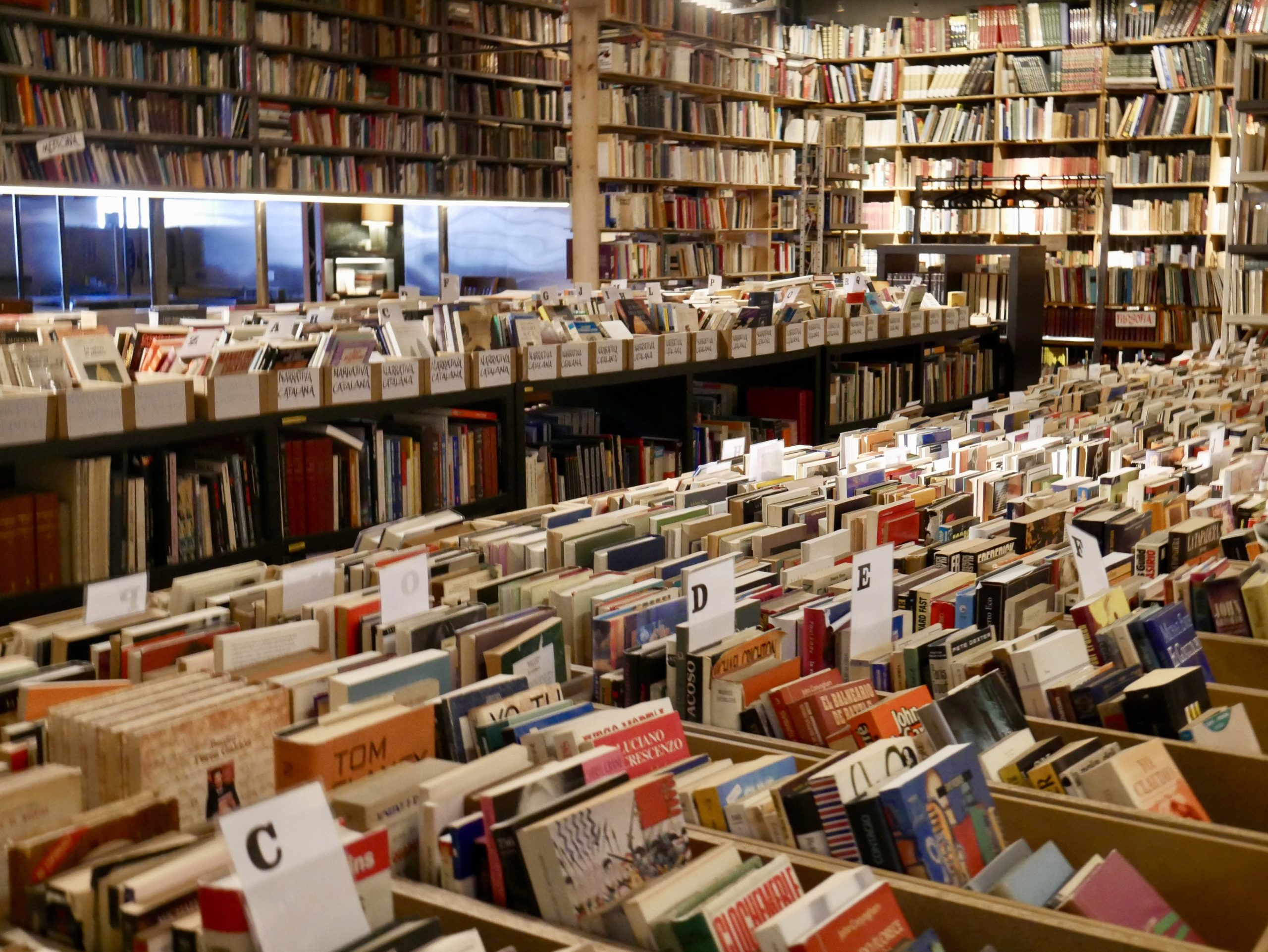 Shopping can be hungry work at the weekends many street food stall pop up, if you visit during the week as I did than La Gula offers very tasty food.  I ate at La Gula and tried their Gazpacho: this cold tomato soup is found all over Spain but has its origins in Catalonia. 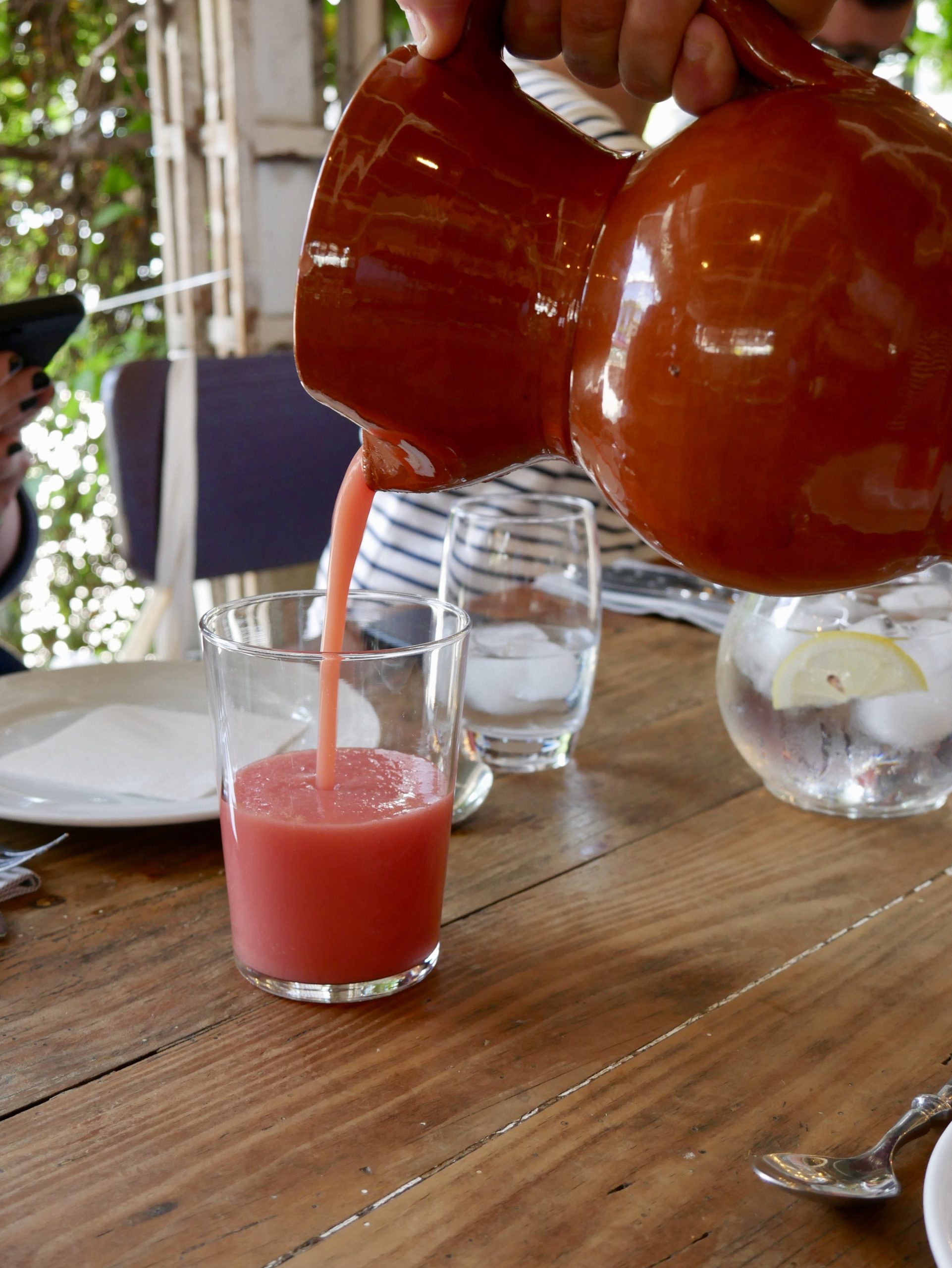 A little way outside Sant Cugat lies the Sant Medir Hermitage and every year on March 3 people process from the Abbey of Sant Cugat to the hermitage.  Why?  I hear you cry. In the 19th century a baker ravaged by disease prayed to Sant Medir.  He promised that if he was cured then he would worship at the hermitage.  A cure followed swiftly and he kept his word.   This is not a solemn gathering.  The Gegants (huge paper mâché figures) and Capgrossos (big headed paper mâché figures) are paraded along. When everybody gets to the hermitage the fun really begins.  With the building of castellers, dancing and a mass.  What are castellers?  They are human towers, community groups spend all year practicing building these towers.  So unique are they to Catalonia that they have UNESCO status.  We were lucky enough to see some castellers at work when we visited Costa Brcelona. 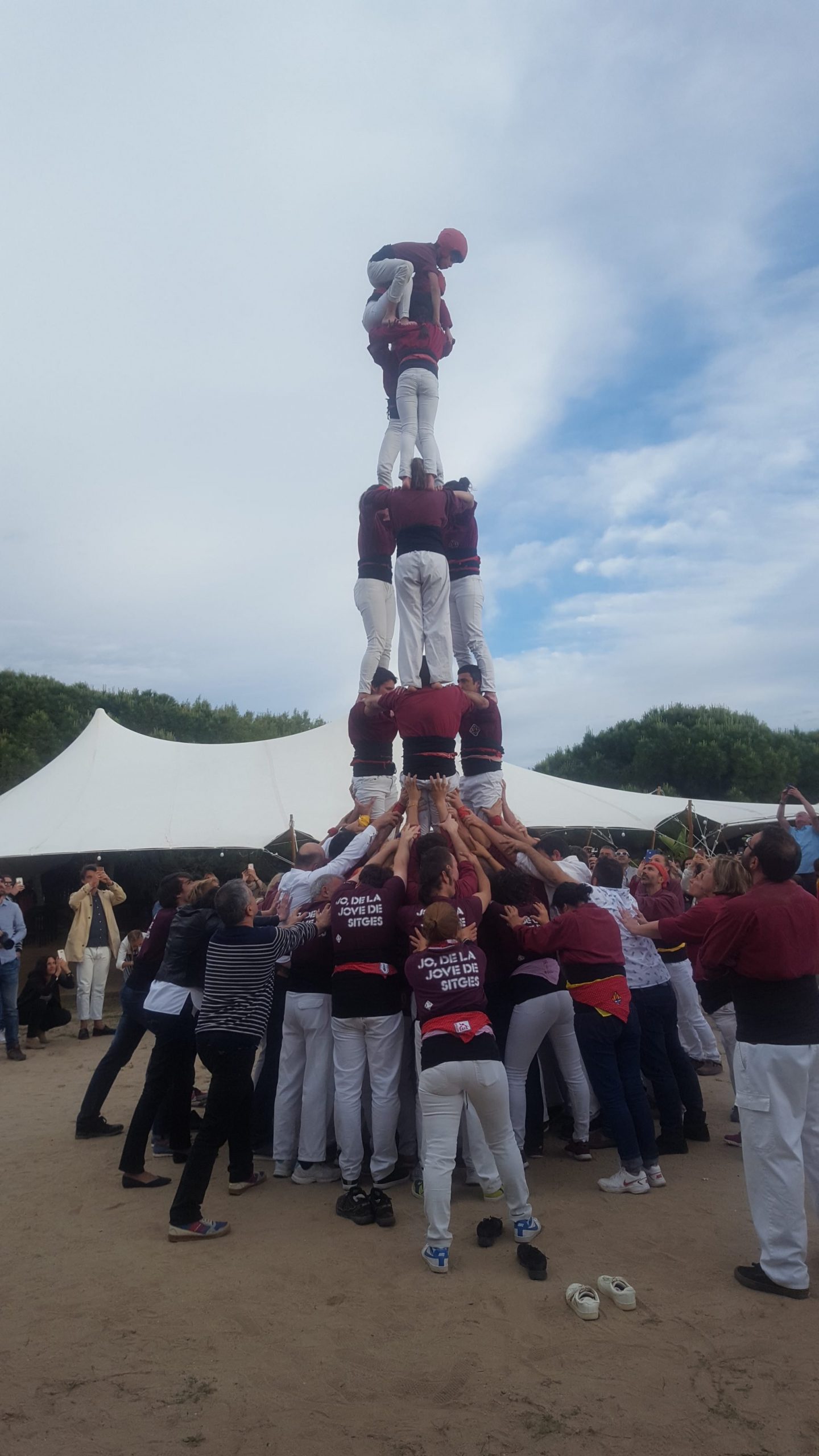 Is the BIG festival it starts around June 29 and lasts for four days.  It has the lot: parades, fireworks and the Paga-li Joan dance.   What is the Paga-li Joan dance?  Well it dates from the 18th century and is also known as the dance of Vano and Ram, inspired by a song that Sant Cugatens used to sing when working.  Joan and Marieta, the huge Gegants lead the dance and are followed by children and grown ups all following the same steps. 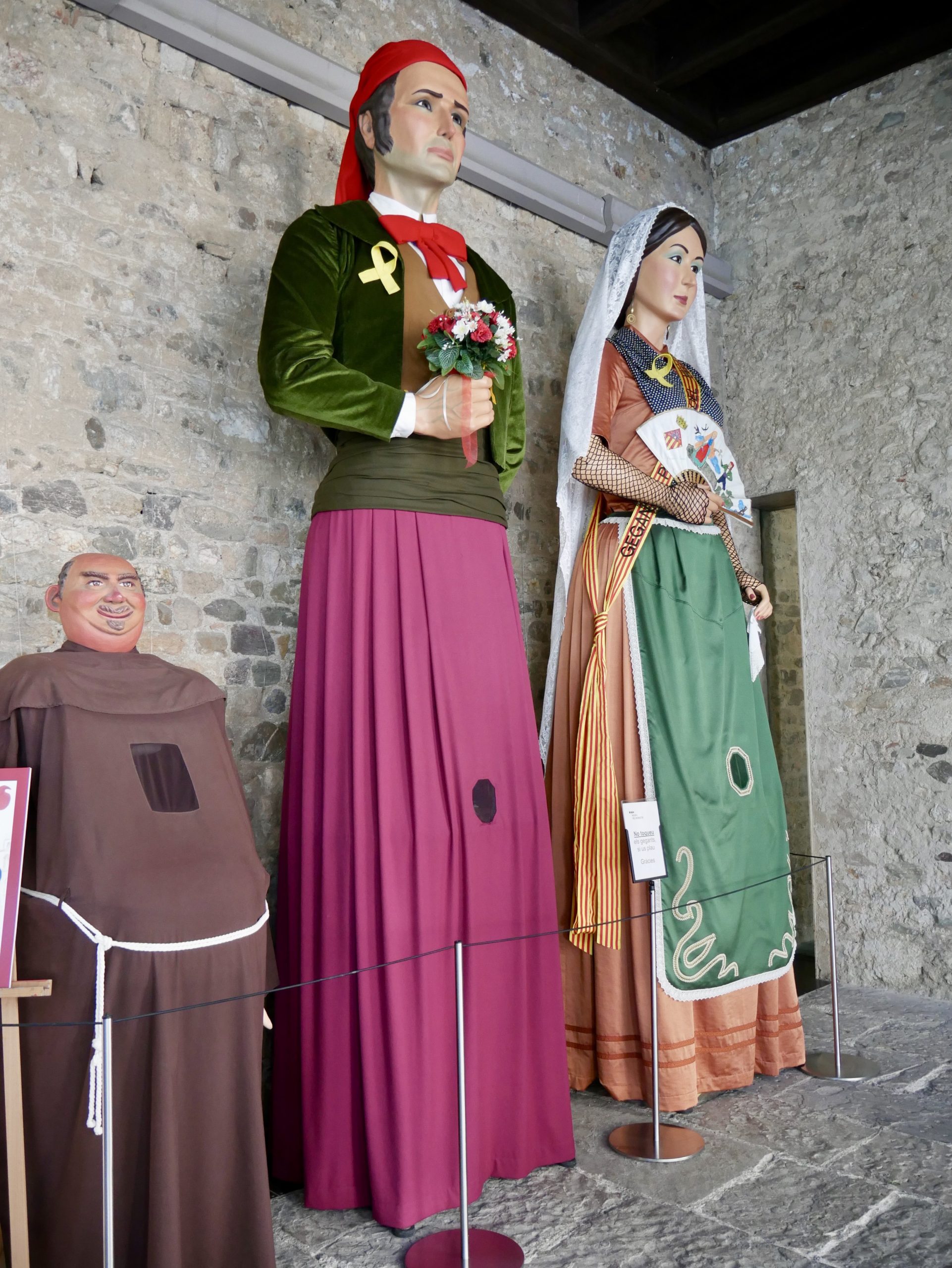 You’d expect a Christian Monastery to be big on Christmas, but Sant Cugat’s celebration is a little different. The Christmas Eve mass is called the Missa del Gall, or Rooster’s Mass.  Whilst the cock crowing does feature heavily in the story Jesus’s life it isn’t usually associated with Christmas.  Well in Sant Cugat it is.  In 1350 one Ramon Berenguer de Saltells murdered the Abbot Biure in the middle of the mass over a problem with inheritance.  So horrified was the metal rooster on the weather vane that it sang loudly but has never done so since.  The self same rooster presides over the Christmas Eve mass.  You can see the play Pedra I Sang, based on the events performed in the Chapter House off the Cloisters.  Celebrations run from 24 December – 6 January.

If the idea of staying for longer appeals, or even using Sant Cugat del Valles as an alternative base for Barcelona there are many hotels.

AC Hotel Sant Cugat – 150 metres from the train station and part of the Marriot chain.  During my visit to Costa Barcelona I stayed in the sister hotel of AC Gava Mar, by the seaside, and found it to be very comfortable with good breakfasts and a cooling swimming pool.

Residencia Universitaria Roberto di NobiliHalls of Residence – further away from the station and available only outside University term time.  I haven’t stayed there but the CW family have stayed in University Halls of Residence elsewhere and always found them to offer good well priced accommodation.

GETTING TO SANT CUGAT DEL VALLES

Train:  Commuter trains (known as FGC) leave central Barcelona often.  Routes S1, S5 and S55 all get you to Sant Cugat.  The journey takes around 20 minutes and costs €3.10.

Road:  Driving up the C16 is probably the fastest but the road does have tolls, depending on the time of day the journey should take 20-30 minutes.

The area just outside Barcelona has so much to see and do, read how I fell for fast cars at the Circuit de Barcelona Catalunya

I visited Costa Barcelona as a guest of Barcelona Province Counci, all opinions are my own.