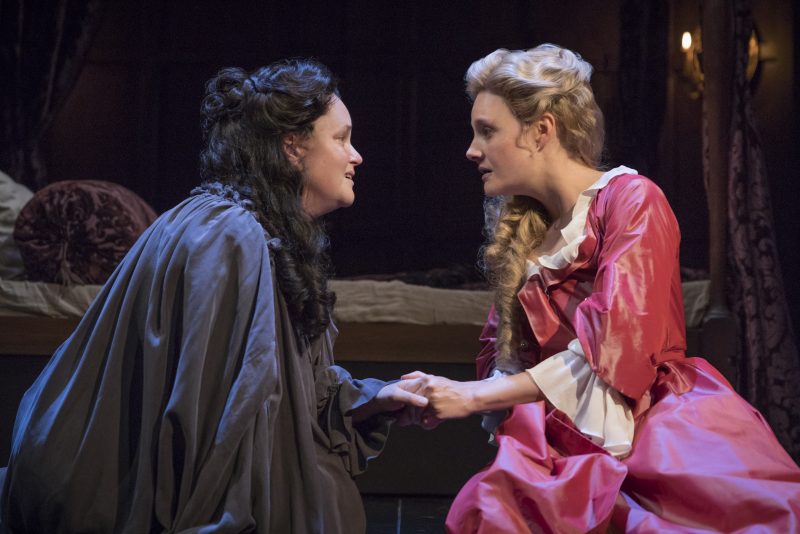 August 2017 is different for us.  The teens have headed off to Sweden for a Scout Jamboree leaving us home alone for two weeks.  What to do?  All those grown up things that we haven’t done for the last fourteen years.  Top of our list was to visit the theatre.  Queen Anne is a Royal Shakespeare Company production that had excellent reviews when it was on in Stratford and so we were keen to see it for ourselves when it came to London.

Queen Anne is a new play written by Helen Edmundson and it focuses on the relationship between Queen Anne and the Duchess of Marlborough played by Emma Cuncliffe and Romola Garai.  The pair have known each other since they were girls, they have nicknames for each other, they are the closest of close friends.  The play starts just as Anne is about to ascend to the throne with those surrounding her scrabbling to gain influence over the new Queen.

At first everybody seems to think that Anne is dimwitted and a bit of a pushover.  Indeed she does hand over enormous amounts of power to the Duke and Duchess of Marlborough and their ally, Godolphin.  The Duchess ensures that her cousin, Abigail, becomes the Queen’s new lady’s maid.  Except she doesn’t know that her cousin is also the cousin of her arch political enemy Harley, who is leader of the Commons.

Political machinations swirl around, the good and simple Abigail remains steadfastly at the Queen’s side, quietly speaking truths to the Queen that the Duchess would prefer she didn’t hear.   At the heart of this play is the relationship between two powerful women, it is refreshing to see a play focusing on female power play rather than the more usual masculine version. That the two women and the story are real so much the better.  The play had me gripped but there are also comic moments that made me laugh out loud.