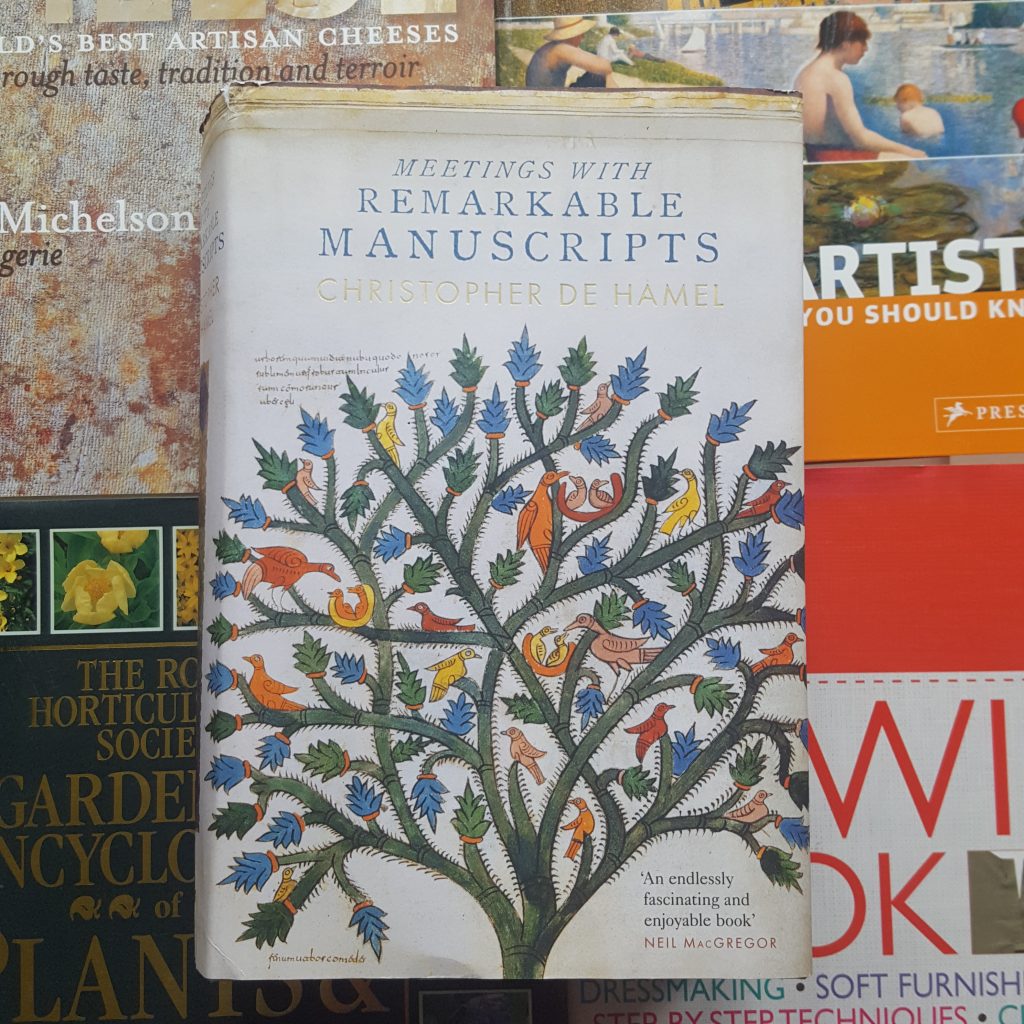 Meetings with Remarkable Manuscripts is not a book to read on the train.  It weighs in at one and half kilograms, not handbag friendly.  You could read it on a kindle but that would be wrong for this is a book about books.  Not just any books but ancient beautiful manuscripts, written and illustrated by hand.  Christopher de Hamel was Sotheby’s manuscript man, he selects twelve medieval manuscripts for us to meet.  Each has a lavishly illustrated chapter devoted to it.

What can you say about a book?  Surely a palaeographer will be academically dry?  (Palaeographer’s are those who study ancient manuscripts) Lots, you can say lots and Christopher de Hamel is so boyishly enthusiastic about his subject that you could never be bored.  Each of the star manuscripts shimmies  into the spotlight.  Turns out that getting to meet a famous manuscript is every bit  as tricky as getting to interview a Hollywood star.  We are introduced to their current home and keepers and then we get to glimpse them for the first time.  Every library is different, some insist on white gloves, others are far more cavalier.  Some hide their glories behind plain covers and others luxuriate in velvet.

Facts spill out of the pages.  My biggest revelation:  Carmina Burana is a book.  Carl Orff didn’t just dash out some suitably Latin sounding lyrics to go with his rousing music.  No, he acquired a facsimile copy of the original and was inspired to write the music.  It is the oldest collection of secular songs in the world.  Those lyrics they really are Latin.

Meetings with Remarkable Manuscripts has left me wanting to meet some myself.  I can feel a trip to Dublin coming on just to see the Book of Kells.  That I spent three years living in Newcastle and never once went to Jarrow to see where the Venerable Bede plied his trade is a matter of regret (although in my defence in those days the Metro didn’t make the journey as easy as it is today).  Most of all I would love to see the book turned into a television series, I’ve never met Christopher de Hamel or heard him speak but his joyous writing style hints that he would be a good guide.

Finally a big thank you to my brother who gave me the book for Christmas.