Trafalgar Square home to Landseer’s lions guarding Nelson and his column.  All around statues of the great and good gaze down.  One plinth, however, remains unfilled.  In recent years a procession of works of art have graced the Fourth Plinth.  What will be next?  You can have your say.   Five contenders for the next occupant are on show at the National Gallery, all touting for your vote.  The Cultural Wednesday family visited on Saturday and cast our votes.  Who will you choose? 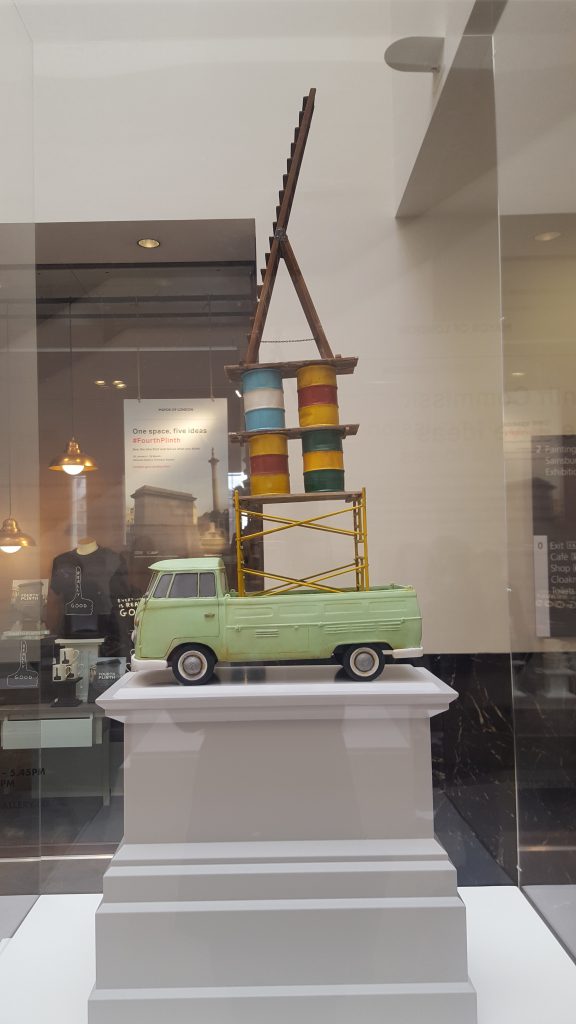 A VW van, topped with scaffolding, barrels and a ladder, a construction that looks as if a strong gust of wind would whoosh it off the Fourth Plinth is the work of Damian Ortega.  Precarious but colourful, it would brighten up Trafalgar Square. 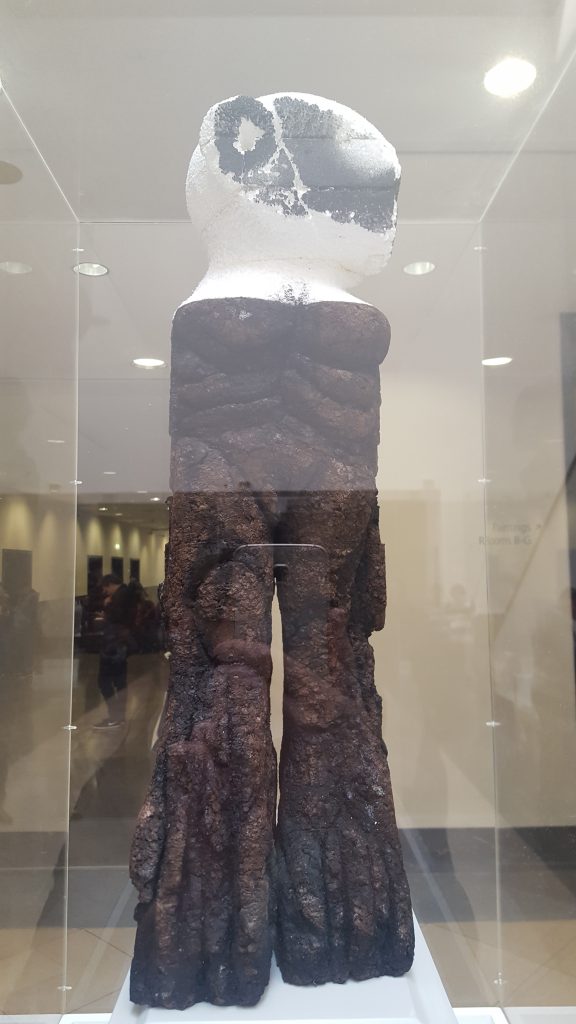 I confess that I’m not sure what is represented by Huma Bhabha’s offering, maybe that is why it is “Untitled”.  To me it looks like a space helmet on top of a furry animal body. 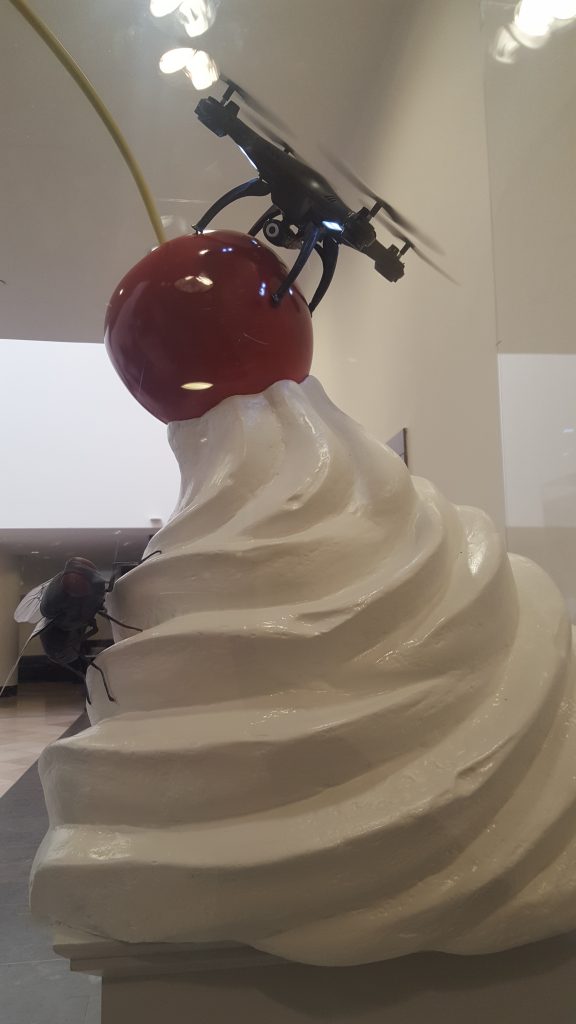 Maybe the Fourth Plinth should be topped off with a swirl of cream and a cherry like an ice cream sundae.  Heather Phillipson has imagined just that but with the addition of both a giant fly and a drone that will broadcast live pictures of Trafalgar Square to your mobile.  I quite like the idea of interactivity. 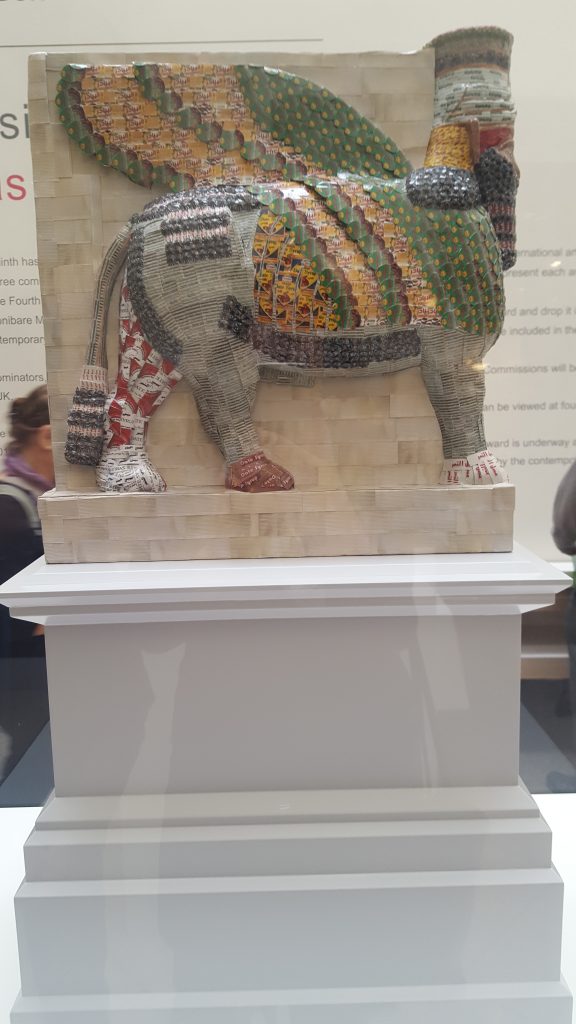 How about a recreation of the Assyrian winged bull that was destroyed by ISIS in Mosul.  Not a reproduction in the original marble but made of date syrup cans to represent the Iraqi date industry that has also been destroyed by the war.  I love the colours of the syrup tins. 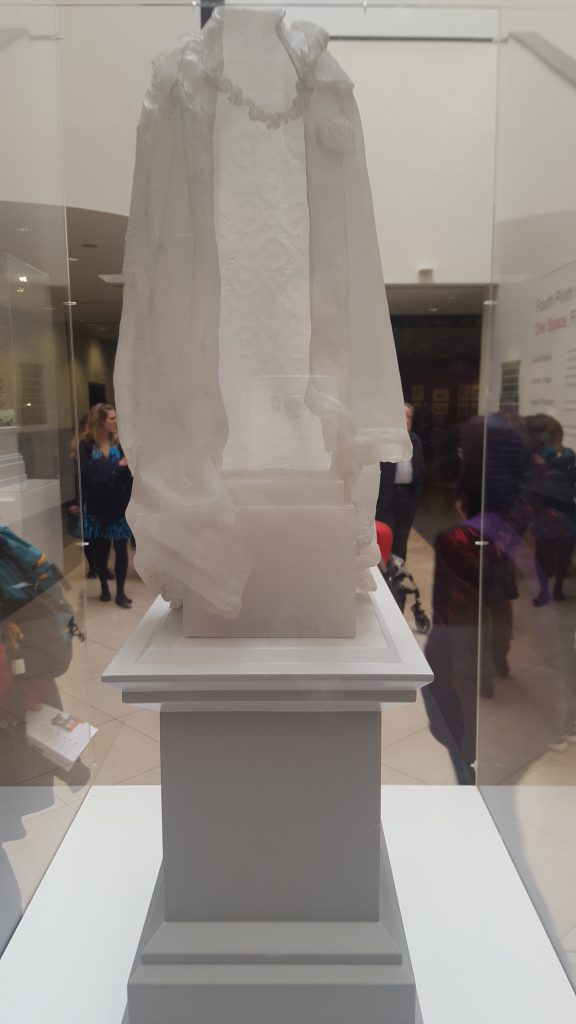 Maybe colour isn’t your thing.  “The Emperor’s Old Clothes” is a ghostly white presence imperial robes but without a body.  The robes of office but without the reassuring substance of a body.

We each chose different works for our vote.

STOP PRESS:  And the winners are ….. the Assyrian Winged Bull and the Swirl of Cream.  Click here to see the Lammasu on his Plinth.